<![endif]-->
Advanced Search
Kharafi National Labour Had Brought Their Grievance Of Not Being Paid Their Due Salaries
Category: Kuwait 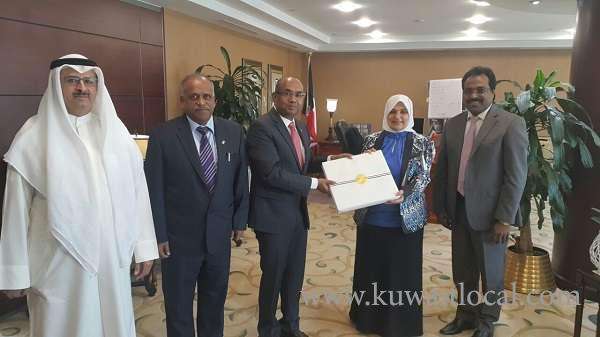 In mid-February several hundred Indian workers from Kuwait’s leading infrastructure development company Kharafi National had brought their grievance of not being paid their due salaries — in some cases for as long as six months — to the attention of the Indian embassy.

Following discussions with top level company management of Kharafi National, the embassy had been assured that salaries would be paid starting in March. Since this promise did not materialize, the embassy has been pursuing the matter for weeks at the highest government level.

In the latest development, H.E. Sunil Jain the Ambassador of India met with the Minister of Social Affairs and Labor H.E. Hind Subaih Barrak Al-Subaih at her office this morning,( Tuesday, 21 March) and discussed the issue in depth.

Minister Al-Subaih assured the ambassador that everything possible would be done to find a solution to this vexing problem within the coming days. She noted that the ministry of Social Affairs and Labor is committed to ensuring that all workers are paid their legitimate dues and that their labor rights are fully protected under the laws of the country.

To recap, the employees who had gathered in front of the embassy in mid-February were only a small representation of the nearly 3,000 employees of Kharafi National who had not been paid salaries for months at a stretch. Every month the company had repeatedly assured the workers they would get their salaries, only to renege on the promises at the end of the month.

Without any financial resources, the employees continue to live under desolate conditions in their camp in Shuaiba Industrial Area, sometimes for weeks without water, poor sanitation, intermittent electricity, and with no access to proper medical care.

Last week, a Kuwaiti humanitarian volunteer organization arranged for free meals to be distributed in the workers camp. While this gesture was no doubt a welcome relief for the thousands living in the camp, the workers lamented that all they wanted was the salaries owed to them, for their months of sweat and hard labor, and the right to return home safely to their families.