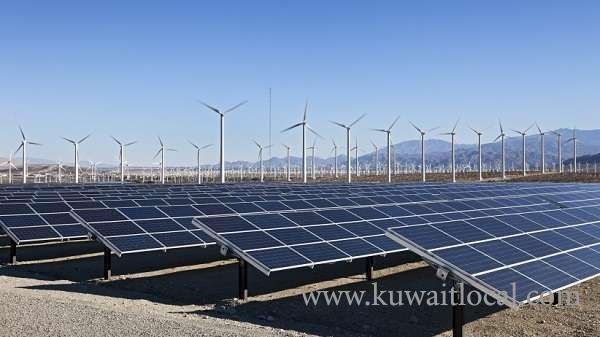 The growing demand for energy globally and rising rate of consumption locally highlight need to implement far-sighted vision of His Highness the Amir Sheikh Sabah Al-Ahmad Al-Jaber Al-Sabah to tap into renewable energy resources. The vision, aiming to meet 15 percent of the local consumption through renewables until 2030 will spare up to more than US$ 2.463 billion annually, experts estimate.

Minister of Oil and Minister of Electricity and Water Essam Al-Marzouq has recently said the demand for energy in Kuwait will go up to one million barrels a day (bpd), nearly a quarter of the country's total output, by 2035 when the total population hits 5.5 million. Al-Marzouq's projection is based on the strategy of Kuwait Petroleum Corporation (KPC), which targets producing four million bpd.

His Highness the Amir's vision is expected to spare at least 150,000 bpd daily worth US$ 6.750 million a day or US$ 2.463 billion annually. The figures are based on oil price of US$ 45 per barrel (pb) set in the state budget for FY 2017-18. Since the oil prices are reasonably expected to go up twofold to US$ 90 in the coming 18 years, His Highness the Amir's vision will undoubtedly spare up to US$ 4.9 billion a year.

With a total population of 4.42 million people in early 2017, Kuwait consumes 350,000 bpd worth US$ 15.750 million based on the current oil price of US$ 45 pb, according to the statistics of the Public Authority for Civil Information (PACI).

Since His Highness the Amir announced his vision at the 18th session of the Conference of the Parties to the UN Framework Convention on Climate Change (UNFCCC) in Doha, Qatar, on December 4, 2012, growing numbers of state institutions, particularly the oil sector, the main energy consumer, have started implementing the vision.

Since the solar energy is the most viable among renewables in Kuwait, the renewable energy projects focused on investing, and made outstanding progress, in this field. Besides, the costs of investment in this regard are less by 12 percent than other fields, according to experts.

The first such pilot projects is Al-Shaqaya which has been implemented by Kuwait Foundation for the Advancement of Sciences (KFAS) since 2013. The project, costing KD four billion (US$ 13.083 billion), envisages producing clean energy equivalent to about 12.5 million barrels of oil a year when its third stage completes in 2030.

It will cover 3-4 percent of the annual energy consumption of the country in 2030; the output capacity of its first stage, which will complete in 2018, amounts to 70 megawatts; the second 1,000 mw in 2020, and the third 2,000 mw in 2025. Kuwait Institute for Scientific Research (KISR) is working with the Ministry of Electricity to complete the second stage of the project.

Another pilot project in the exploitation of solar energy is Sidra 500, being carried out by Kuwait Oil Company (KOC) in Om Qadir, west Kuwait. The project, costing KD 30 million (US$ 981.2 million) went operational last October; it produces 10 mw of energy, equivalent to 500,000 barrels of oil over two decades.

Half of its production will go to the Ministry of Electricity and Water and the remaining five mw will be used in the industrial operations in Om Qadir oil wells. The third solar energy project is Al-Debdeba being implemented by KPC inside Al-Saqaya complex.

It envisaged capacity amounts to 1,000 mw which will cover 15 percent of power needs of the oil sector when it completes in 2021. In keeping with His Highness the Amir's vision, KFAS started implementing other green energy projects such as the introduction of solar panels as source of electricity to a number of consumer cooperatives and 150 houses in 2016 and 2017.

The Ministry's committee on leveraging the uses of renewable energy approved 56 clean energy projects in last January. The country also plan to exploit the wind energy in order to cover another 15 percent of its energy needs by 2030; one percent of this target was met in 2015.

The far-sighted vision of His Highness the Amir falls in the framework of the country's quest for curbing the carbon dioxide emissions, reducing reliance on oil as pillar of its economy, and achieving sustainable economic development.