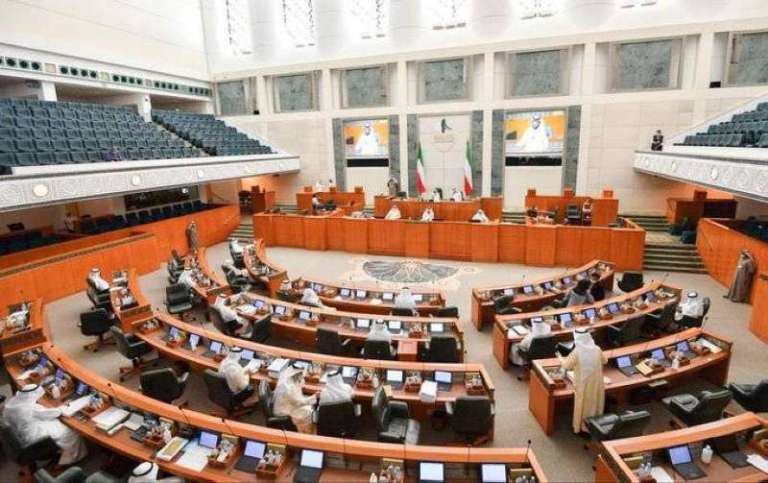 Today, the National Assembly approved the demographics law in two deliberations and referred it to the government, in return the parliament rejected the bill regarding support and guaranteeing local banks financing for clients affected by the repercussions of the Coronavirus crisis and raising it from the agenda.

With regard to the demographic regulation law, the parliament approved an amendment requiring the Council of Ministers to prepare a regulation that includes controls for expatriate workers within a year of the law’s approval.

Al-Ghanim explained that, after approval of the law, it is referred in accordance with Article 103 to the Legislative Committee to verify the wording.

After the law was passed, MP Salih Ashour said, “We have seen the government’s seriousness in modifying the demographics, and the next parliament must follow the law first-hand.”

The Representative, Safaa Al-Hashem, indicated that she pledged four years ago to the demographics file and “received the worst types of insults and accusations.”

Discussing the report on “Persons with Disabilities”, and

following the completion of the Demographics Law, the Council moved to discuss the report of the Committee on “Persons with Disabilities” regarding the rights of persons with disabilities, which was approved in the first debate.

National Assembly Speaker Marzouq Al-Ghanim opened the special session to discuss a number of laws, after the opening session of the fifth supplementary session of the 15th legislative term.

The Council started its work by discussing the fifteenth report supplementary to the fourteenth report of the Financial and Economic Affairs Committee on the amendments submitted to a draft law to support and ensure the financing of local banks for clients affected by the repercussions of the Coronavirus crisis, which was approved by the Council in its first deliberation in its session held on 07/10/2020.

l-Ghanim said: There are amendments that have been submitted and the law has not changed from what was mentioned in the first debate, and anyone who has a law can present it.

Al-Ghanim clarified that “no amendment was approved because the amendment procedures were not completed in the first session,” commenting on MP Badr Al-Mulla’s statement that it was agreed to delete the phrase “other clients” in the first deliberation.

Then the Minister of Finance, Barak Al-Shitan, reviewed the law to guarantee bank financing, saying: This law was presented to the economy in general and included all economic sectors, indicating that the government presented its proposals and opinion on the law, including all economic sectors during its meeting in the Financial Committee after the first deliberation, pointing out that If (other clients) are excluded from the law, a ceiling will be set to include project owners that do not exceed half a billion instead of the 3 billion as was covered by the original law.

He explained that the government is compatible with the council in canceling (other clients) to include small and medium enterprises as well as projects that do not exceed 500 million dinars.

Al-Shitan indicated that after canceling (other clients) in the law, a phrase is placed that the grace period is two years and the payment is within five years, provided that the law deals with the inability to benefit from it for those who are obligated to pay from it, stressing that this law will be implemented regarding the project owner and those affected, and during it the compound interest and murabaha will be given to local banks. The Islamic financing does not exceed 1%, provided that the government bears 80% of it.

For his part, Representative Adnan Abdel Samad said that it is good for general consensus to be reached regarding the law after the amendments mentioned by the minister, and I ask MPs who have amendments to be satisfied with what the Minister of Finance prefers, especially since the important amendment has been agreed upon, stressing the need to amend the explanatory memorandum of the law to include The amendment mentioned by the minister that everyone was demanding.

For her part, the Head of the Finance Committee, MP Safaa Al-Hashem, indicated that the Council agreed to amend the law’s title to the Small and Medium Enterprises Support Law, and to amend the abolition of (other clients) and define the concept of those affected by “those who were working efficiently and had national workers and their activities were damaged by the Corona virus.”