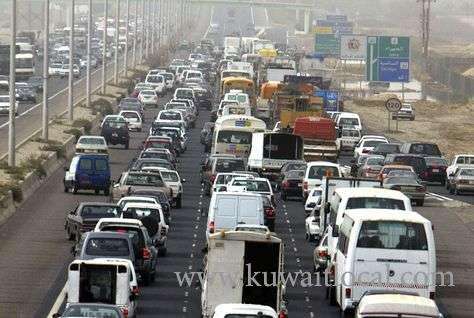 The General Traffic Department has completed a study on toughening penalties for those who commit grave traffic violations, reports Al-Shahed daily. Reckless drivers shall be imprisoned for three days, fined KD150 and their cars will be impounded for three months.

The study also recommended KD100 fine for beating the red light and parking in areas allocated for the disabled.

Sources said the study was submitted to Interior Ministry Undersecretary Lieutenant Major Suleiman Al- Fahd who will forward it to Deputy Prime Minister and Interior Minister Sheikh Mohammad Al-Khalid for approval and submission to the Cabinet and National Assembly for final approval.

Al-Hashash noted the Deputy Premier and Minister of Interior Sheikh Muhammad Al-Khaled Al-Hamad Al-Sabah at the launch of the project of Public Relations Department Thursday Oct 17 expressed concern over the growing rate of traffic accidents among minors.

Colonel Adel Al-Hashash indicated the announcement by Traffic Sector to issue violation citations against vehicles that obstruct traffic movement in all roads and withdrawing of the vehicles number plates effective from Sunday, Oct 30 will be followed by placing stickers on the windows of vehicles to notify the owners about the violation.

He stressed the step confirms the department’s commitment to prioritize solution to traffic problems. It is worth mentioning the decision was taken due to the phenomenon of traffic disturbance, which requires enforcement of Article 42 of traffic law that authorizes the Director of General Traffic Department to withdraw the driving licenses or number plates or both for a minimum of four months.

Al-Hashash stressed it’s strictly forbidden to drive a vehicle without the number plate, and that broken-down vehicles will be removed from the road at the expense of the driver. He noted Kuwait is among the countries with excessive number of vehicles that lead to traffic jams and accidents. He reiterated that human factor plays a major part in the problem due to disregard for traffic rules.