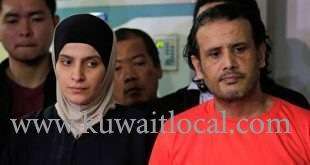 Suspected Islamic State militants arrested in Kuwait and the Philippines were planning to carry out bombings against US military forces in Kuwait, Al-Rai newspaper reported on Monday.

The suspects were also plotting a suicide attack on a Hussainiya, or Shi’ite Muslim meeting hall, said Al-Rai, which has close ties to the security services. Philippine security forces arrested a Kuwaiti and a Syrian for suspected links to Islamic State on March 25, three months after they arrived in Manila.

A spokesman for the US Embassy in Kuwait referred queries to Kuwaiti authorities. Kuwaiti security officials did not immediately respond to a request for comment. Kuwait, home to several US military bases, suffered its deadliest militant attack in decades when a Saudi suicide bomber blew himself up inside a packed Shi’ite mosque in June 2015, killing 27 people.

Islamic State claimed responsibility. The Ministry of Interior has made a major breakthrough at the security level through a pre-emptive strike and thwarted a terrorist attack which was planned by the Islamic State or the socalled DAESH on the country’s security, stability and the national fabric, reports Al-Rai daily. Judicial and security sources familiar with the interrogation of a person who has been taken into custody for allegedly collaborating with Hussein Al-Dhufairi and his Syrian wife Rahaf Zina, said the security authorities in Kuwait who were on the trail of Al-Dhufairi.

The daily said the four people who were taken into custody recently in connection with the plot included a Syrian chemistry teacher working at a Kuwait government school. He has been referred to the Public Prosecutor’s Office. He is suspected of coordinating with those involved in the scheme based on evidence of his frequent visits to North Syria.

Elaborating, the security sources said the suspects were planning to bomb the Al-Tayyar Husseiniya in Sulaibikhat. The suspects were planning to carry out the attack similar to the attack during the Boston Marathon four years ago. The sources added two cooking vessels filled with explosives, ammonia and ball bearings called ‘pressure cookware bombs’ had been prepared to bomb the Husseiniya. One of the vessels was seized from a livestock pen and the other from Saad Al-Abdullah. The sources also revealed this group was planning to target the US soldiers in Kuwait.

In the aftermath of the arrest of the couple in the Philippines the security forces raided several areas including Saad Al-Abdullah, Taima and others and detained some people for interrogation as a precautionary measure. There are many others who have been under surveillance. They will be arrested once the authorities have concrete evidence on them.