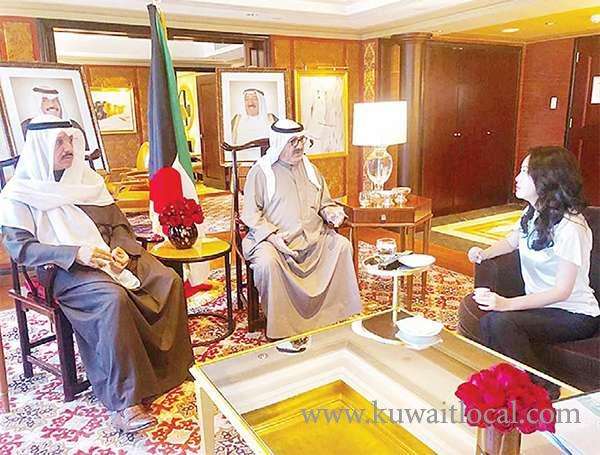 The letter is related to strong bilateral relations and strengthening strategic partnership between both countries. The two countries’ partnership is like a cornerstone for attaining sustainable development in the Asian continent, and a base for integrating Kuwait’s “New Kuwait 2030” Vision with China’s “Belt and Road” initiative, he noted. Enhancing the Kuwaiti-Chinese partnership is essential for their mutual interest and joint economic and commercial cooperation, Sheikh Naser Al-Sabah said, adding it would contribute to broadening their cooperation prospects in other fields.

Enjoy
Kuwait and China enjoy a close historical friendship, he mentioned, adding such a relationship has fl ourished over the years in political, economic, investment, commercial, and cultural fields. Kuwait was the first Gulf country to establish diplomatic ties with China, noted the Kuwaiti top official.

Sheikh Naser also said his current official visit to China aims to re-boost the Kuwaiti-Chinese strategic partnership in various fields and solidify their relationship. All MoUs and cooperation agreements between the two nations, signed during His Highness the Amir’s July visit to China, are currently in the process of implementation, he said. He also stressed the importance of maintaining communication, coordination, and consultation with Chinese authorities regarding the “Belt and Road” initiative and finding ways to link it with “New Kuwait 2030” Vision. Linking such important development projects would empower Kuwait to become an international economic and fi- nancial center, Sheikh Naser Al-Sabah affirmed.

As part of its strategy to transform its economy into a varied sustainable force, Kuwait has invested in its geographic location in northern the Arabian Gulf by linking its safe economic and commercial passageway with the “Belt and Road” initiative, he added. Furthermore, the Kuwaiti minister underlined the significance of bolstering joint humanitarian virtues between China and Kuwait and activating a multi-aspect exchange between their people in educational, cultural, and athletic fields, said Sheikh Naser Al- Sabah. He invited all Chinese from various backgrounds to visit Kuwait, explore its urban and natural landmarks, and meet Kuwaitis directly.