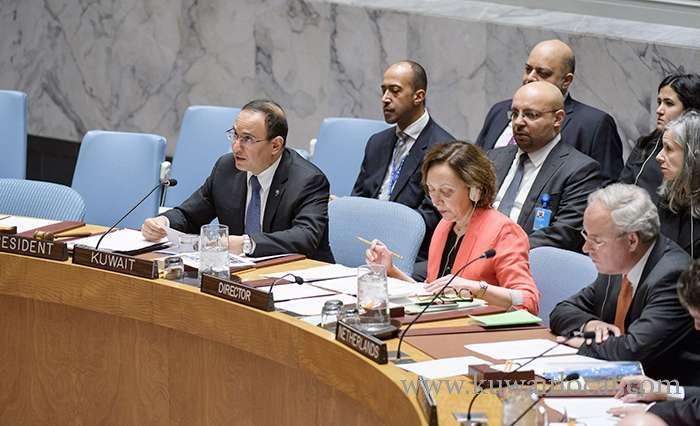 State of Kuwait said Tuesday UN Security Council's (UNSC) role could be enhanced to enable it carry out its responsibility in line with the UN Charter.

UN member countries' contributions to decision-making is still weak because of work mechanism and lack of transparency, all under pretext of maintaining efficiency and fast decision-making process, Mansour Al-Otaibi, Kuwait permanent representative to the UN, said.

He was speaking before a formal UNSC open discussion session about the council's work methods, aimed at improving way the council works to improve its capabilities to maintaining global peace and security.

Al-Otaibi, who chairs UNSC for February, said the Security Council witnessed many improvements over the past 25 years, including flow of information to and from the UNSC, the increase in formal sessions, participation of NGOs and civil society groups.

"These are positive improvement specially for non-permanent members," he said. Although these improvements improved transparency of UNSC, he said, "we think it is not enough and believe in involvement of member countries, specially those related to the question being raised, and to have consultations before adoption of resolutions, in line with Articles 31 and 32 of the UN Charter."

He said at a time Article 25 of the Charter called for member countries' compliance with UNSC resolutions, the Council should also abide by other articles of the Charter to boost its legitimacy and credibility, like imposition of sanctions and formation of peacekeeping forces.

Al-Otaibi referred to the use of veto by the UNSC permanent members, and said "over-use of veto by some of the five permanent countries contributed in many cases to undermining the credibility of the decision-making process."

The veto, he added, also banned the UNSC from carrying out its role to maintaining international peace and security. "The use of veto by some of the permanent members over the past years showed how these countries were eager to defend their national interest or interest of their allies," he said.

Kuwait, said Al-Otaibi, was among the signatories of a document in which UNSC members pledged not to oppose draft resolutions that address crimes against humanity, genocides and war crimes.

"We hope we can reach an agreement through which no veto wil be used in humanitarian issues like allowing delivery of urgent relief assistances for civilians, medical evacuation and humanitarian truce," he said.

Kuwait hopes this UNSC open discussion, the first since July 2016, would allow all parties to express their views to improve work methods of the Council. "We wish to hear views of everybody so we can keep working to improve working methods of the Security Council, and to build upon previous efforts of our predecessors," he said.

Al-Otaibi commended role of Japan which contributed to issuing Memo 507 last August. This memo, he added, has great benefits because it allowed new members, like Kuwait, to monitor UNSC sessions three three months before start of their membership.

Such practice, among many others, allows new members to blend smoothly into the council working mechanism, he said. Kuwait is in its second month of its UNSC membership, said Al-Otaibi, but exerted efforts to guarantee transparency and inclusiveness.

Kuwait is chairing the UNSC committee over Democratic Republic of Congo, and held its first meeting on January 26, he noted.

The meeting was open to allow all members interested in this issue to participate. "Accordingly, the State of Kuwait is planning to hold an informal session at end of this month to highlight major events during its presidency, and I am looking forward for attendance and participation of all UNSC members and non-members," he said.