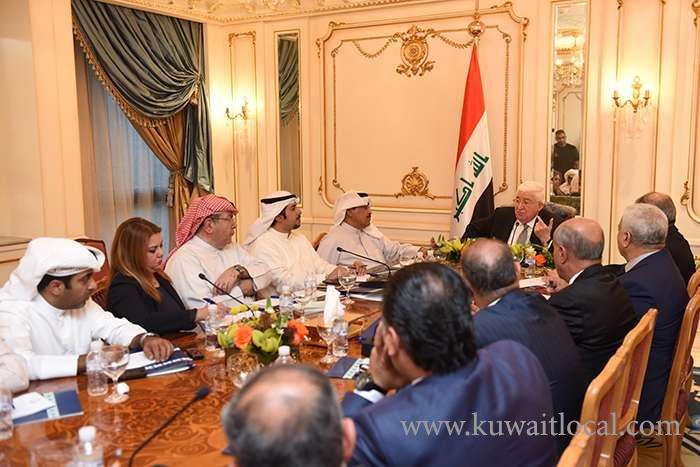 He laid it bare that Iraq would not take the side of Iran against any Arab country or vice versa. Iraq has its peculiarity and it is important to maintain it, he stressed.

On the prospects of the eruption of any confrontation following the rapid developments in the region, Masum warned that "such a confrontation will not be easy." If the regional confrontations intensified, the region would be open for foreign interferences, he cautioned.

He asserted that regional countries would be affected by the repercussions of such confrontations. Any confrontation would have impacts on the region in general and Iraq in particular, he said. On bilateral relations, the Iraqi president lauded the "good" Iraqi-Kuwaiti relations.

He pointed out that these relations were crowned by the historic visit of His Highness the Amir of Kuwait Sheikh Sabah Al-Ahmad Al-Jaber Al-Sabah to Iraq to partake in the Arab summit there in 2012.

During his short visit to Kuwait, the Iraqi president said that he met and held talks with His Highness the Amir Sheikh Sabah Al-Ahmad Al-Jaber Al-Sabah, Parliament Speaker Marzouq Al-Ghanim, and His Highness the Prime Minister Sheikh Jaber Mubarak Al-Hamad Al-Sabah.

He noted that these meetings uncovered Kuwait's great interest in developing relations with Iraq. He, however, said that there are still some pending issues between the two Arab countries.

These issues need to be solved, he said, adding that he had felt flexibility and understanding from the Kuwaiti leaderships and officials to agree on compromises on these issues.

Among these pending issues, are the remaining compensation for damage caused by Iraqi invasion and occupation of Kuwait, and Abdullah estuary and the maritime borders, he said, adding that "I received positive responses from the Kuwaiti side for resolving these issues."

On the date of the international conference for rebuilding the Iraqi areas liberated from the so-called Islamic State group, the Iraqi president said the conference would be held in Kuwait next February or March under the patronage of His Highness the Amir of Kuwait and with a wide participation from international donors and relevant agencies. On the security situation in his country, he stressed that the Iraqi government should pay due attention to the dossier to help enhance investments.

He also called for legislative reforms to attract more investments to the war-torn country. On securing the money required for Iraq reconstruction, estimated at USD 100 billion, President Masum admitted that such a sum could not be secured without the help of regional and international donors.

In this regard, he stated that Kuwait had provided huge aid to Iraqis displaced by the "terrorist" aggression of Al-Qaeda and IS groups. Asked about a security agreement between the Iraqi and Syrian governments after the Syrian regime retaking of the strategic border city of Al-Bukamal in Deir Al-Zour from IS, he responded that "Iraq's security is linked to Syria's security and vice versa."

He argued that the liberation of the Iraqi cities from the IS group and the defeating it in Syria, necessitates efforts from the Syrian regime and opposition as well as the guarantee states to consider and agree on Syria's future.

He suggested a limited period for governing in Syria to be followed by a transitional period during which free and democratic elections are held under international supervision.
; On Iraq's reservations to the Arab League condemnation of Iran's interferences in Arab countries, President Masum asserted that his country did not want to take sides in the ongoing escalation.

He underlined the need for dialogue to iron out differences, warning that if escalation persisted in the region, the situation could go out of control. The president reiterated Iraq's support to the unity and stability of Gulf countries.

"This region has undergone many experiences that taught us the importance of maintaining good relations among its states," he said. He stated that, "differences among sisterly Gulf states, are not in the interest of Iraq.

"We believe that dialogue is better than any confrontation," he noted. On Iraq's reservations to the Arab League condemnation of Hezbollah's policies in Lebanon, the Iraqi president argued that, "Iraq can not support or oppose a resolution that targets a coalition government (in Lebanon).

"We can't put Iraq in the line of fire and allow this confrontation to extend to its territories," he said. He advised the Lebanese government to adopt to dialogue for iron out differences with other Arab countries with regards to their concerns about Hezbollah activities.

He warned that the dispute could escalate into a full-blown military confrontation. "Iraq won't be part of any fighting or even be a crossing point for Iran to any Arab country or vice versa," he made it clear.

On Iraq's relations with the Kingdom of Saudi Arabia, he described it as "good. "My first visit to a foreign country after election was to the Kingdom Saudi Arabia," he said, underlining that religious and sectarian factors should not play a role in creation of relations between countries.

On his stance of Iraq's Popular Mobilization Forces, the president stated that PMF has made great sacrifices for Iraq, notably their support to the Iraqi army in the fight against the so-called Islamic State group. He ruled out the possibility of dissolving the PMF, but noted that "there is a need to reconsider their affiliations and apply relevant laws on them as well as follow up closely their behavior."

Asked If Iraqi Kurds undergo a state of shock after the Iraqi Federal Court's ruling annulling the independence referendum and declaring it unconstitutional, Masum, a Kurd himself, said that Iraqi Kurds are not in a state of shock or feel broken and have accepted the court ruling.

He argued that some Kurdish parties had made wrong calculations about the referendum and independence.

"Their estimations were based on history not geography," he suggested. He pointed out that the Iraqi constitution had been written at a very delicate time and had guaranteed the protection of different social segments, enmities, and sects.

The constitution has been successful in many aspects, particularly in the protection of freedoms and political rights, but it needs some amendments, he said.

On the negotiations between Baghdad and Irbil, the Iraqi president unveiled that a delegation from Kurdistan government visit Baghdad and hold talks with the Iraqi government next week over a number of important issues, at the forefront of which the province's budget.