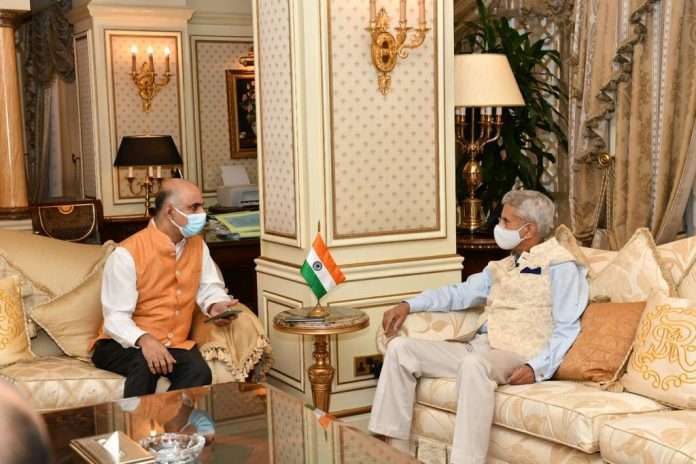 “Kuwait is a very notable example of the rebalancing of relations with India in a world after COVID-19, as we discover that we can help each other in times of pressure,” Indian Minister of External Affairs Dr. Subrahmanyam Jaishankar told The Times Kuwait during his visit last week to the country.

“Part of this rebalancing was realizing that we can do many things for each other with capabilities that we did not have before,” the minister explained. Elaborating on this, he added, last year India had sent a team of medical personnel to Kuwait and also provided vaccine doses to this country, as well as to others in the region, as part of our joint effort against the pandemic. Then, last month, when India faced an intense second wave of the virus and required emergency medical oxygen, the countries in the region came to the rescue and readily shipped oxygen and other medical equipment, the most notable among them was Kuwait.

“In the past relief or support would come from fairly distant countries but today, whether it is natural disasters, pandemics, food security or energy security, we look at the capabilities and possibilities of our immediate neighbors; this will make for a very different world,” he noted.

In India we now give a lot of importance to the Gulf region, especially Kuwait which we see as one of our historical partners, the minister pointed out. “Kuwait is a strong partner for India within this important region. Our bilateral ties with Kuwait are expanding rapidly with increased engagements at the highest levels and enhanced trade, economic and investment linkages between our two countries.

The Indian External Affairs Minister arrived in Kuwait on an official three-day visit on 9 June. During his visit Dr. Jaishankar met with Kuwait’s Prime Minister and delivered a letter from Indian Prime Minister Narendra Modi addressed to His Highness the Amir Sheikh Nawaf Al Ahmed Al Sabah. The visit also comes against the backdrop of India and Kuwait celebrating 60 years of diplomatic relations.

“My counterpart, H E Sheikh Dr. Ahmed Nasser Al-Sabah, Kuwait’s Minister of Foreign Affairs, visited India in March 2021. During his visit, we upgraded the Joint Ministerial Commission to the Foreign Ministers level. This is a significant shift in our institutional dialogue mechanism; we will also be setting up new Joint Working Groups across various fields including trade, investments, renewable emergency, defence, tourism, education and so on.”

Noting that there was excitement, enthusiasm and more importantly optimism on both sides to take the partnerships to newer heights, the minister added, “My visit comes in this context of increased political engagements at the highest levels between our two countries. I also had very good discussions with Kuwait interlocutors and made significant progress on all issues of mutual interest.”

The Indian minister reiterated that India viewed the region and particularly Kuwait as a very important long-term partner. “Our bilateral relationship is definitely poised to move to a higher trajectory. We are fully committed to increasing our cooperation in all areas of mutual interest to both countries and I am quite confident that we will significantly transform this relationship into a mutually enriching and forward looking partnership,” he stressed.

Elaborating on the key takeaways from the current visit, the minister noted that there were multiple outcomes  from the visit. “We have imparted a new momentum to our bilateral relationship. There was a positive discussion on a wide range of areas. Both sides are enthused to take the relations to a higher level. We now have an upgraded institutional dialogue mechanism at the level of Foreign Ministers. This is a significant step in elevating the level of our relationship. We have agreed on setting up new Joint Working Groups in various domains.

“These focused institutional engagements in various new areas will surely open a plethora of opportunities for mutual collaboration. We also signed the Memorandum of Understanding (MoU) on Domestic Service Workers; this I believe is a significant development which will help in further streamlining the manpower. To summarize, this is a key visit which comes when our ties are at an inflection point.”

On the COVID-19 situation in India, the minister pointed out that it had improved significantly over the last couple of weeks. The number of new daily infections have now come down to less than a quarter of the peak level. The requirement for medical oxygen has also consequently come down. Many states in India have now witnessed their COVID positivity rates dip below the 1 percent mark. “Our COVID vaccination campaign continues at a fast pace, we have vaccinated more than 246 million people. Our vaccine manufacturing companies are ramping up production and this will be reflected in the ground situation. In this regard, I would like to express my appreciation to the leadership, Government and the friendly people of Kuwait for their timely dispatch of medical oxygen supplies to India,” concluded the Indian minister.

The Indian minister also expressed interest to participate in Kuwait’s Vision 2035 strategic plan. “India has expertise and technical know-how in many of the key areas where Kuwait is looking to diversify into. Some of our companies are already in Kuwait and executing projects successfully. I see more opportunities for many other top Indian companies in Kuwait’s transformational journey towards becoming a regional trade and investment hub. In this regard, I am glad that I had an excellent discussion with His Excellency the Commerce Minister Dr. Abdullah Issa Al Salman yesterday. We discussed working on these complementarities between our two countries and leveraging these synergies for mutual growth and development,” he explained.

“There are close to a million Indian nationals working and living peacefully and contributing significantly to the growth and development of this country. And, I am proud to say that I have heard effusive praise and admiration from the entire leadership of Kuwait for the Indian community in Kuwait. Nonetheless, given the size of the community, there are bound to be some issues or matters concerning the Indian diaspora that were featured in our bilateral talks. I am pleased to say that we have made progress on these issues as well,” said the minister.

He applauded the community and said that it in many ways defines India abroad. “My message to the community is simple; the contribution you make, the respect you earn, the support that you provide, and the bridge you constitute is what makes India’s interaction with the world unique… Keep the Indian flag flying high here in Kuwait,” he said in conclusion.