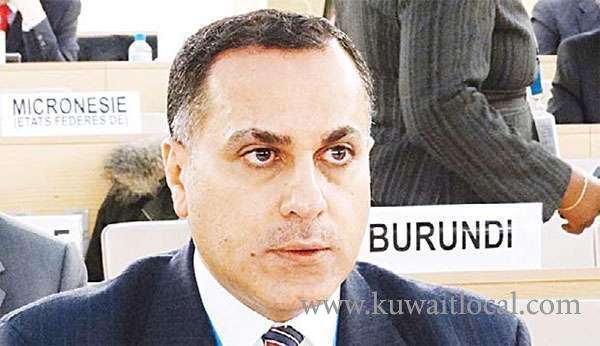 A Kuwaiti diplomat on Monday said that he was bewildered over the selective approaches taken by some nations to the issue of human rights violations in Arab lands occupied by Israel. Addressing the 35th session of the United Nations Human Rights Council (UNHRC), Kuwait’s Permanent Delegate to the United Nations (UN) Jamal Al- Ghunaim said that some nations’ refusal to join discussions over Israeli human rights violations is tantamount to veiled support of Israel.

Moreover, he noted that it was imperative to have continued dialogue over the worsening humanitarian conditions in Arab lands occupied by Israel, an issue that makes up the seventh item on the agenda of the 35th UNHRC session.

The Kuwaiti envoy underscored the need for Israel to abide by UN resolution 2334, which states that Israeli settlement activity in Palestinian territories is legally null and void. Al-Ghunaim also spoke of Kuwait’s humanitarian obligation to support the Palestinian people until their aspirations for statehood and sovereignty come to fruition.

Director of Antiquities and Museums at the National Council for Culture, Arts and Letters, Dr Sultan Al-Deweish, affirmed on Monday signifi cance of the 12th meeting of the Arab experts committee for international heritage which kicked off earlier today here.

Dr Al-Deweish said in a statement to KUNA that participants in the meeting discussed the cultural heritage in the Arab states and plans to safeguard the treasures in addition to the ancient sector of the ancient city, Jerusalem. The conferees will discuss, during a second session scheduled tomorrow, Arab landmark ancient sites nominated to be enlisted in the international heritage namely Al-Khalil (Hebron) town in Palestine, the Jordanian town of Al-Salt and Dubai Bay.