<![endif]-->
Advanced Search
23 People Arrested And Dozens Of Weapons Seized In A Series Of Raids On Suspected Islamist Militants Across France
Category: Kuwait 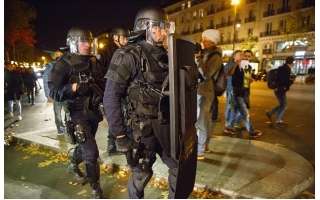 A total of 23 people have been arrested and dozens of weapons seized in a series of raids on suspected Islamist militants across France, officials say. The crackdown follows multiple attacks on bars, restaurants, a concert hall and a stadium in Paris on Friday, in which 129 people were killed. A police operation is also under way in Brussels, Belgium, with reports that one suspect was arrested. Shots and explosions have been heard in the district of Molenbeek.

France held a nationwide minute of silence at midday local time (11:00 GMT) for the victims. French PM Manuel Valls said the attacks had been organised from Syria. He added that the authorities believed new terror attacks were being planned in France and other European countries. Meanwhile two more Paris attackers were named, along with five already identified. One is confirmed to have entered Greece as a migrant earlier this year.

Police have named Brussels-born Salah Abdeslam, 26, as a key suspect, and a manhunt is under way. He was reportedly stopped by officers in the wake of the attacks while crossing into Belgium but then let go.  Meanwhile, French aircraft have attacked Raqqa, the stronghold in Syria of the Islamic State group, which has said it carried out the attacks. IS has issued a statement saying the raid targeted empty locations and that there were no casualties. Mr. Valls said France was dealing with a "terrorist army", rather than a single terrorist group. "We know that operations were being prepared and are still being prepared, not only against France but other European countries too," he said.

The prime minister said more than 150 raids on militant targets had been carried out in different areas of France early on Monday. "We are making use of the legal framework of the state of emergency to question people who are part of the radical jihadist movement... and all those who advocate hate of the republic," he said. Police sources told news agencies that properties in the Paris suburb of Bobigny, as well as the cities of Grenoble, Toulouse and Lyon, had been targeted.

Interior Minister Bernard Cazeneuve said 23 people had been arrested and dozens of weapons seized, including a Kalashnikov assault rifle and rocket launchers. More than 100 people have been placed under house arrest. Seven attackers died in the assault on the French capital, most of them after detonating suicide belts. Five were identified over the weekend. On Monday another two were named by the Paris prosecutor as Ahmad al-Mohammad and Samy Amimour.

Al-Mohammad is the name on a Syrian passport found with the remains of one of the attackers, though the man's identity has not yet been verified.  Amimour was said to be facing terrorism charges in France. He was placed under judicial supervision while under investigation for terrorist conspiracy - he planned to go to Yemen. An international arrest warrant was issued against him when he broke bail in autumn 2013. Three of his relatives were among those detained this morning.

One of the main lines of investigation concerns Molenbeek, which has a reputation as being a haven for jihadists. One of Abdeslam's brothers, Mohammed, was reportedly arrested there when he returned from Paris. He remains in custody. Belgian police say they have made a total of seven arrests.

Belgium's Premier Charles Michel said the Belgian authorities would crack down on Molenbeek. France is currently marking a second day of national mourning. A state of emergency declared by President Hollande remains in force. Thousands of extra police and troops are on the streets of Paris.