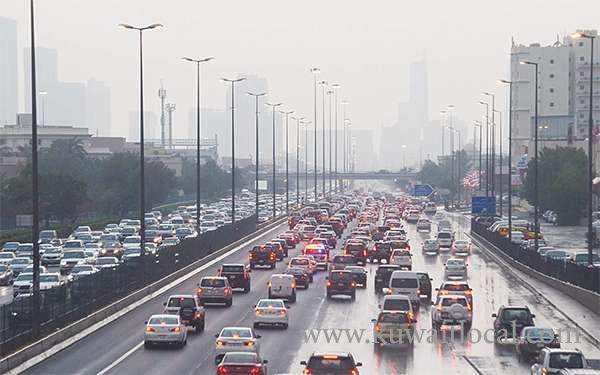 Clouds were spotted in west and south of Kuwait, and will reach residential areas in coming hours, he said. This state will continue with wind speed over 60 kilometers per hour, he said, while horizontal visibility declining. Al-Ali said quantity of rain would decrease and weather would start improving on Monday morning. The department appealed to people to follow up weather bulletin through its website: http://www.met. gov.kw to know latest developments and warnings if necessary.

Meanwhile, Kuwait’s Ministry of Interior said it was closing some roads and diverting traffic because they were covered with water. King Abdulaziz Road where the tunnel of Sabahiya and Manqaf was closed as well as the Kabad Bridge on the Seventh Ring Road, the MoI said in a statement.

It added that Kabad Road beyond the fourth roundabout in the direction of the cooperative society. The roads were filled with rain water and traffic was impossible through them.

Weather in Kuwait continues to be turbulent amid cloudy skies and forecast medium to heavy rainfalls, said a meteorologist on Sunday.

Al-Ali told KUNA that the country would witness 50 km/h winds, causing 6-feet sea waves. Coming rain is forecast to persist till late hours of the night. Weather will improve gradually as of 3:00 am on Sunday and would last until Tuesday, but rain would start pouring as of Wednesday, a meteorologist forecast on Saturday.