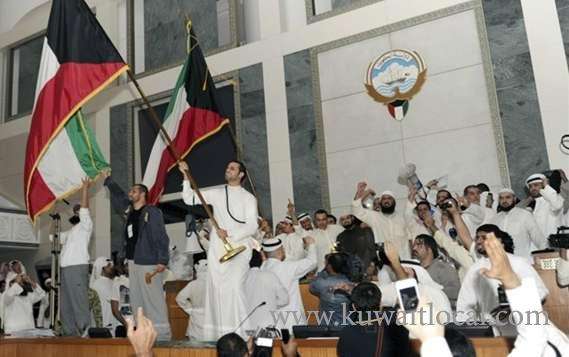 In the voting on withdrawing the memberships, up to 31 MPs voted in favor, 29 opposed, along with two absentees, in the session, attended by a total of 62 members.

The Court of Cassation had ruled in favor of amending the appeal verdict, issued on Nov 27, 2017, in the “National Assembly case,” sentencing 13 defendants to three years and six months behind bars – among them MPs Al-Harbash and Al-Tabtabaie. It had also ordered imprisonment of two defendants, abstained from applying a penalty against 34 defendants and acquitted the others.

A senior judicial source said the verdicts which have been issued by the Constitutional Court are final and cannot be either discussed or challenged, reports Al-Qabas daily quoting reliable sources.

In response to the discussions in the interpretation of the last Constitutional provision, and regarding the declaration of the invalidity of membership of MPs Jamaan Al-Harbash and Waleed Al-Tabtabaei, the senior judicial source, said, “What happens in the long debate are clear provisions that need no explanation and which will not be responded to.”

He added: “What is stated in the provision is clear. The ruling nullifies Article 16 of the bylaws of the National Assembly.” Chairman of the parliamentary Health Affairs Committee MP Homoud Al-Khodair has confirmed that the Mental Health Bill is ready for discussion in the next session.

Al-Khodair said the committee approved amendments to 11 articles of the bill such as inclusion of civil institutions to the entity in charge of managing mental health affairs and canceling the right of police officers to refer an individual to mental healthcare. The amended bill stipulates that only the Criminal Investigation Department, Public Prosecution and judiciary have the authority to refer an individual to mental healthcare, he added.

Meanwhile, the Economic and Financial Affairs Committee has finalized its report on the Early Retirement Bill to pave way for its second reading in the upcoming session. Committee Chairman MP Salah Khourshed revealed the panel approved the proposal to allow any employee to retire after serving for 35 years regardless of the age. He said around 25,000 employees will benefit from this bill once approved and implemented, clarifying that early retirement is voluntary.