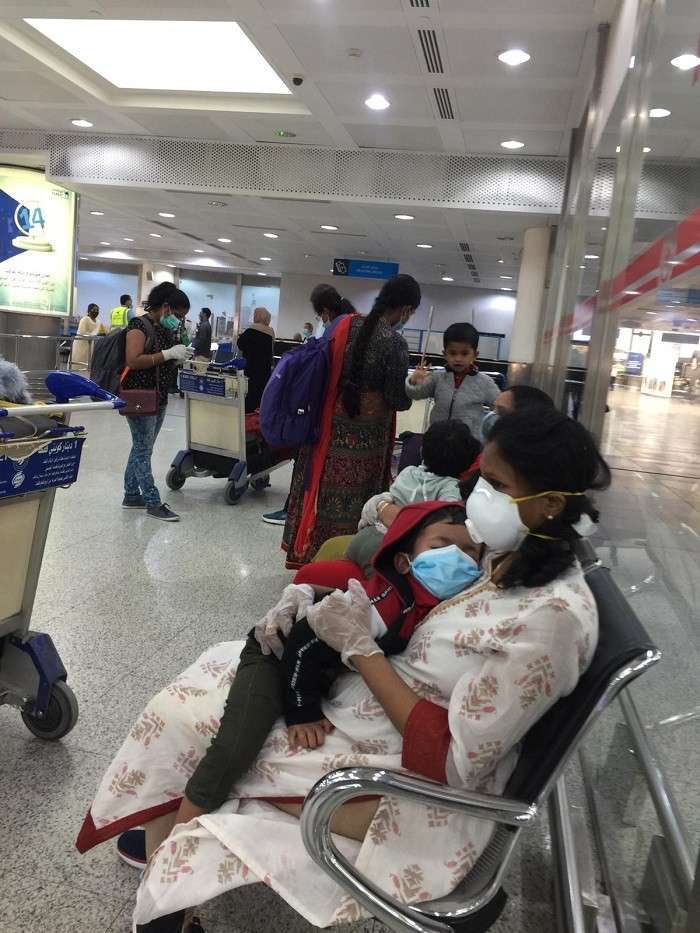 Stranded Indian Nationals who are traveling to Chennai from Kuwait expressed their gratitude to Indian Government for ensuring their flights to India under the Vande Bharat mission. Anushuya Baskar, native from Karaikudi, Taminadu living in Kuwait and she is 7 month pregnant; she was having some difficulties and wanted to go back to India on medical grounds, but due to the current issues, she was unable to travel to India.

Once the Indian government announced the Vande Bharat mission, she registered on the embassy website to return to India, and she got the ticket and today. She and her 2 year old son travelled to Chennai. After completing the procedure for travel at the airport, she thanked the Indian Government, Officials from Indian Embassy Kuwait & Air India.

One more pregnant lady Suganthi Swaminathan native from Pondicherry; her husband was not able to come back to Kuwait from India due to the current lockdown. She and her children were struggling in Kuwait and she wanted to travel back to India to unite with her husband.  Mr. Mathi, General Secretory, Indain Frontliners (IFL) (who is currently in India) coordinated with Indian Embassy to send back these two pregnant ladies. Upon his recommendation Indian Embassy officials considered their requests and provided them tickets to travel on the first flight to Chennai. Both of them thanked Mr. Mathi for his essential support on time to travel back to India.

Stranded Indians who are flying back to India got emotional after reaching the airport following arrangements by the Indian Embassy for their repatriation. They expressed relief and gratitude for finally getting to return home. They are very happy that they got the chance to go on the first flight itself.

Thanks to Indian Government and Indian embassy Kuwait for giving opportunity for the genuine cases.