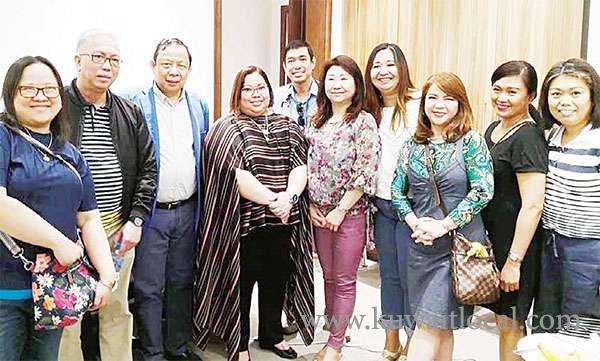 Migrant Workers Affairs Undersecretary at the Philippines Department of Foreign Affairs Sarah Lou Arriola expressed on Friday the Philippines appreciation and gratitude to the Kuwait government for its goodwill in reaching out to the Philippine government to discuss the refinement of the Memorandum of Understanding (MoU) on the Protection and Deployment of Filipino Household Service Workers (HSWs) to Kuwait. “We are very thankful that they travelled to the Philippines to discuss further current issues on the deployment ban and provisions requested by the Philippine government. Initial documents have been signed earlier but the Philippine President required more provisions for the welfare and protection of OFWs and a government to government contract for OFWs,” stated Arriola who arrived in Kuwait on Thursday together with some members of the Office of Undersecretary for Migrant Workers Affairs (OUMWA) Rapid Response Team.

Filipino Workers in Kuwait who availed the amnesty given by the Kuwait government. “The OUMWA team has a marching order from the Philippine President to utilize the funds of the Department of Foreign Affairs to help all Filipinos who wish to go home.

The team supports the Philippine Embassy contingent,” she explained. Arriola is set to meet with officials at the Kuwait Ministry of Foreign Affairs to discuss matters of mutual concern that were tackled recently during the joint bilateral talks between Kuwait and the Philippines that was held in Manila “We hope that both governments can formulate a standard working contract between employer and employee. We hope to come to terms with Kuwait with a model contract, which other countries can apply and we are grateful that both countries are open to talks, although it might take a bit of time,” she cited. Arriola highlighted the Philippines stand on the deployment ban and its openness to friendly talks with Kuwait.

“We have a long standing good relationship with Kuwait and what occurred recently was a wake up call for both countries to work on the ground. We thank Kuwait for their help but one abuse is but too many and we have to stand firm and as a sign of protest the ban was implemented. Unlike the previous government which simply paid a lip-service and did not attend to the OFWs needs. The Philippine government wanted an agreement that is clear and if anything is violated they will be held accountable. The President wants a government to government agreement. This is also in response to OFWs who still would like to stay in Kuwait and work but with safer working environment,” she explained.

When asked on the timeline of the signing of the MoU, Arriola pointed out that the agreement is now in the technical stage as the Philippines awaits Kuwait’s response to the proposed provisions on the MoU focusing more on the issue of accountability.

“The Philippine Embassy has already started filing cases and let us see how the justice system works. With the total deployment ban both countries are suffering and as per the President words, we are going toward a government to government agreement with a central agency to handle the deployment. But again, we trust in the leadership as the President is the architect the government and we at the DFA will always support. As of now we can’t promise anything but the embassy will be here always to be the OFWs sanctuary and provide in any way it can to assist and provide for the needs of our migrant workers,” she stated, Arriola also appealed for understanding to all those who were affected by the deployment ban for the greater good of all OFWs.

“We at DFA apologise to them but this move is in solidarity with abused Filipinos in Kuwait. It is a sacrifice they can do for the rest of Filipino migrant workers abroad. It is an ultimate sacrifice but this is all for now and we also have to look forward to other possible markets overseas. Let them approach DOLE and surely assistance is available as promised,” she explained.

As to the lifting of the deployment ban, Arriola speaking on behalf of the DFA was quick to add that the DFA has no information yet on this matter. “We remain optimistic but at the end of the day it’s still the President who will make the final decision and we will all support. The last time the President said that unless justice is served with Demafelis’ case and agreement is made with Kuwait then the ban will stay.

We are still waiting for the result of her case. DOLE and DFA were both present during the negotiations and the secretaries are the alter ego of the President yet no assurance has been made regarding the issue. There is no advice from the President and instruction whatsoever regarding the lifting of the ban,” she stressed.

Arriola also met on Friday with over 1,000 distressed OFWs at the POLOOWWA shelter who were mostly victims of various forms of physical, verbal or sexual abuse, unpaid salaries and lack of food or overwork and handed them with DFA goody bags on the side of the medical mission organised by some Filipino organisations.

She also had a meeting with the Filipino leaders to listen to their issues and concerns as well as on how the embassy can better serve OFWs in Kuwait. Arriola will be flying back to Manila on Monday but she and her team will be back on April 19 to personally oversee the last days of the amnesty and extend full assistance to all undocumented Filipinos in the country.

“We are appealing to all undocumented Filipinos to please come home and avail the Kuwait amnesty. We will give you free tickets and help you go home,” urged Arriola.

All undocumented OFWs are advised to file their amnesty application at the embassy on or before April 12, 2018 to give the embassy ample time to process their travel documents and exit clearance before the deadline on April 22, 2018. To date, over 4,000 undocumented OFWs have been repatriated under the Kuwait Amnesty Program.