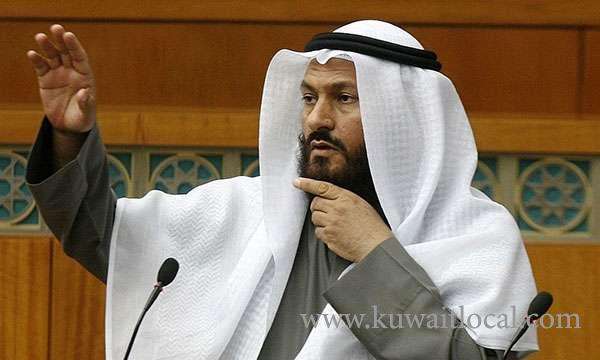 MP Mohammed Hayef has submitted questions to Deputy Prime Minister and Minister of Interior Sheikh Khalid Al- Jarrah Al-Sabah regarding the issuance and renewal of work permits for expatriates working in private companies and institutions.

He pointed out the law states that the issuance and renewal of work permits for some nationalities requires approval from the Interior Ministry.

He inquired if the assistant undersecretary for Citizenship and Passports Affairs granted exemptions for citizens of Bangladesh, Pakistan, Iran, Lebanon, Syria and Iraq. If yes, he requested for the following:

■ Number of exemptions granted from mid-May 2014 till date

He pointed out the decline in Kuwait’s position in the Global Corruption Perception Index is an insult to the reputation and international standing of the country.

He wants to know the factors that led to this decline and action taken by HH the Prime Minister to protect the country’s reputation and status. He said the main objectives of the Anti-Corruption Public Authority are to combat corruption and hold accountable those proven to be involved in such unscrupulous acts.

He inquired if the executive authority played its role in this regard. He added the decline of the country’s position in the index is very dangerous as it indicates defects and failures, so he asked if the government took the necessary procedures to address the issue.

He cited Article 17 of the Constitution which states, “Public property is inviolable and every citizen is duty bound to protect it.” He then asked about the steps taken by the premier to protect public properties in his capacity as head of the Council of Ministers. He asked if the premier followed up and ensured strict implementation of the Constitution — especially Articles 7, 8, 17, 21, 29, 30, 36, 37 and 41? If yes, did he find any violation? What steps have been taken regarding the violation, if any?