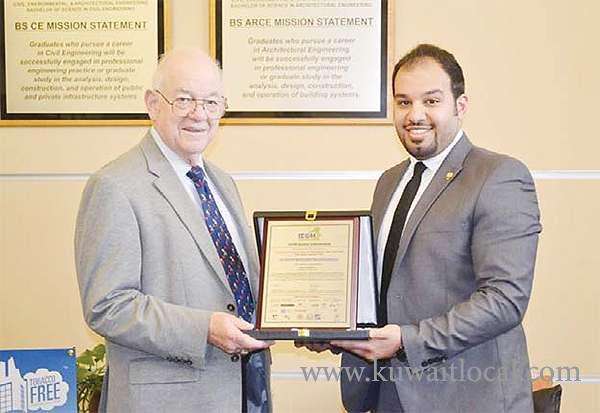 Kuwaiti architect Mishaal Al-Otaibi expressed pride for raising high the name of Kuwait after winning the first place for the best scientific research in architecture in the world. Al-Otaibi, speaking to KUNA on Saturday, said that he won first place at the North American Industrial Engineering and Operation Management (IEOM) Conference, which was participated by 600 researchers from 54 countries, in Washington, DC.

He noted that he had received the best PhD thesis in architecture from the University of Kansas in 2017, and was nominated for a PhD course in architecture.

In August, Al-Otaibi has also achieved first place in 2nd IEOM European Conference on Industrial Engineering and Operations Management in Paris, among 500 researchers from 62 countries.

The IEOM Society organized the Industrial Engineering and Operations Management Conference (IEOM Washington, DC) on (Achieving and Sustaining Excellence in Systems, Service and Operations). This conference provided a forum for academics, researchers and practitioners to exchange ideas and recent developments in the field of engineering.