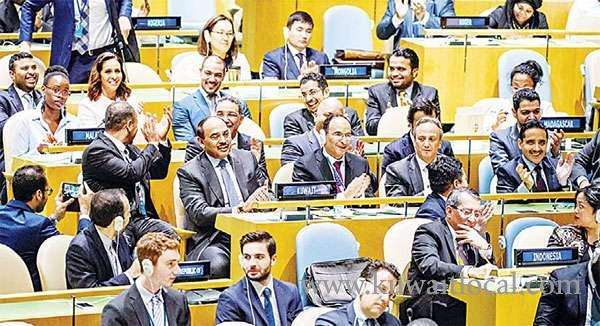 Kuwait was elected on Friday to serve as non-permanent member on the Security Council for a two-year term beginning in January 2018.

In one round of voting the United Nations General Assembly gathered in its main hall and elected Kuwait, Cote D’Ivoire, Equatorial Guinea, the Netherlands, Peru and Poland whom ran unopposed for the five regional group vacant seats.

The Netherlands takes over from Italy for a one year term, after they agreed to split a two-year term as a non-permanent member for Security Council.

Kuwait First Deputy Prime Minister and Foreign Minister Sheikh Sabah Khaled Al-Hamad Al-Sabah led the Kuwaiti delegation during the voting process, accompanied by Kuwait’s Ambassador to the US Sheikh Salem Abdullah Al-Jaber Al-Sabah, Ambassador Sheikh Dr. Ahmad Nasser Al-Sabah, Sheikh Sabah Al-Khaled’s office Director, Kuwait’s Permanent representative to the UN Mansour Al-Otaibi and Deputy Assistant Foreign Minister for International Organizations Nasser Al-Hayyen. His Highness the Amir Sheikh Sabah Al-Ahmad Al-Jaber Al-Sabah sent Friday a cable of congratulations to Sheikh Sabah Khaled over Kuwait being elected as a non-permanent member at the United Nations Security Council. His Highness the Amir hailed the Foreign Minister for all the effort made by him, along with the ministry staff. He lauded the Kuwaiti diplomacy for being able to secure 188 votes in the elections, wishing for them more success in the future in serving Kuwait.

His Highness the Crown Prince prayed to Allah the Almighty to bestow his blessing upon His Highness the Amir to continue his leadership. Lawmakers expressed happiness and congratulated the entire country and its leaders on Kuwait’s election as non-permanent member of the United Nations Security Council. Speaker of the National Assembly Marzouq Al- Ghanim said the election of Kuwait as non-permanent member of the council representing Arab nations with an overwhelming majority reflects the country’s prestigious diplomatic position. He pointed out the “rational and mature voice” of Kuwait’s foreign policy is a positive addition to the council.

He disclosed the country got majority votes 188 out 291 as non-permanent member of the council for two years. He said the country returned to the council after about 40 years as a mature and experienced Arab voice, as an international partner known for its policies on moderation and compromise, and as a diplomatic player that strongly supports policies on restoration of international peace and security in all areas experiencing conflict. He also voiced optimism that the country, represented by the Ministry of Foreign Affairs and permanent delegation to the United Nations, will succeed considering its balanced foreign policy which was laid down by His Highness the Amir Sheikh Sabah Al- Ahmad Al-Jaber Al-Sabah, more than 60 years ago.

He hopes that Kuwait and its international partners will greatly contribute to ongoing efforts to ease tension in areas witnessing political and armed disintegration, as well as find lasting solutions to recurring conflicts in the region and in the entire world. Foreign Affairs Committee member MP Askar al-Anzi congratulated His Highness the Amir, the humanitarian leader and Dean of Arab Diplomacy in addition to HH the Crown Prince, HH the Prime Minister and all Kuwaitis for winning non-permanent membership to the council. MP Salah Khourishdi said Kuwait’s victory is the result of commendable efforts exerted by the Foreign Affairs Ministry and the government through balanced and realistic policies in dealing with various international issues.

He pointed out the ministry strengthened Kuwait’s relations with United Nations member-nations, particularly the Middle East countries, with the aim of ensuring security and stability in the region in accordance with the principles and objectives of the United Nations Charter and international law. He added, “We congratulate the political leadership on this achievement. We pray that Almighty Allah will protect Kuwait for the good of the world.” MP Riyadh Al-Adsani congratulated the leaders and people of Kuwait as the precious homeland won the trust of the international community.

He prayed, “May Almighty Allah guide our beloved country the country of peace and moderation, and bless it with good luck and success in every step, especially its efforts to promote peace.” MP Abdulwahab Al-Babtain thanked all those who exerted tremendous efforts for Kuwait to obtain this important seat through its unique foreign policy and great diplomatic and humanitarian role. He added Kuwait deserves to be a member of the council to continue in its movement towards protecting rights and spreading international peace.