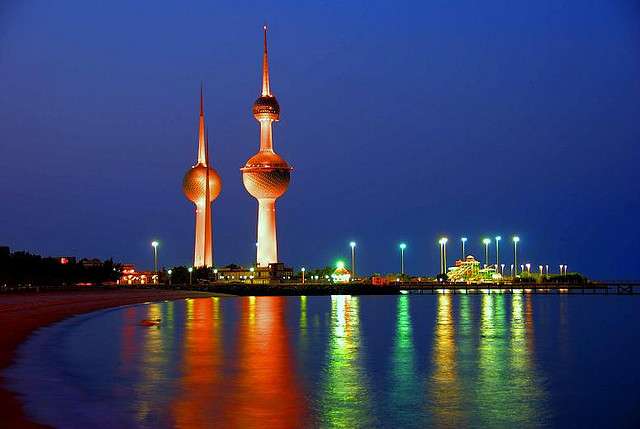 The two leaders discussed ways to develop their relations in all fields, as well as the latest regional and international developments, primarily the Middle East and anti-terrorism efforts,

“The talks focused on ways and means of promoting the economic, investment, oil and military cooperation, reflecting the depth of friendship and size of mutual interests between both sides. The talks were held in a friendly atmosphere that reflected mutual understanding and friendship, with both sides voicing willingness to develop bilateral relations up to the level that fulfills the ambitions of the two friendly peoples,” the official news agency said.

Shaikh Sabah offered his “heartfelt and sincere condolences” to Putin for the victims of the recent Russian passenger plane crash in Egypt’s Sinai Peninsula.

According to the Russian news agency TASS, Putin started the meeting by discussing the situation in the Middle East and describing it as rather difficult.

The president noted that Russia knows the Kuwaiti leader very well as he has long served as the country’s Foreign Minister. “However, this is your first visit to our country as the head of state, and we are very happy about it,” Putin said.

The bilateral accords signed on Tuesday in the presence of Shaikh Sabah and Putin included an agreement between the two governments for the exemption of entry visa for holders of diplomatic, special and service passports, signed by First Deputy Prime Minister and Foreign Minister Shaikh Sabah Al Khalid Al Hamad Al Sabah and his Russian counterpart Sergey Lavrov.

CEO of the Kuwait Petroleum Corporation (KPC) Nizar Al Adsani signed a MoU with Chairman of Russia’s Gazprom Board of Directors Alexey Miller for cooperation between both firms.

A joint investment MoU was signed between the Kuwait Investment Authority (KIA) and the Russian Direct Investment Fund. It was inked by KIA Managing Director Bader Al Sa’ad and Director of the Russian fund Kirill Dmitriev.

Kuwait Opens Airport. More Than 10,000 Tickets Cancelled As Kuwait opened its Airport for commercial operation today, according to reports, more than 10,000 tickets will be cancelled after the sudden decision to ban commercial aviation with 31 countries. ... August 01, 2020 0 8154 Category: Travel

Kuwait Bans Entry From 31 Countries Kuwait today expanded the list of countries, from which it is prohibited for people to enter Kuwait. As the Kuwait airport started commercial activities today, the Civil Aviation Authority announced t... August 01, 2020 0 5936 Category: Travel

India Signs Air Transport Bubble Agreement With Kuwait India and Kuwait have signed a transport bubble agreement which will enable air carriers to uplift stranded passengers both to and from India. However, since Kuwait has issued a temporary ban of re... July 31, 2020 0 5869 Category: Travel

List Of Travel Ban Countries May Change Continuously - Govt Spokesman The Kuwait Government spokesman Tariq Al-Muzaram said that there was no exception for those coming from any country to Kuwait from presenting the PCR certificate, which is mandatory according to healt... August 02, 2020 0 5196 Category: Kuwait

Expatriates Who Left Kuwait After September Can Now Return Expatriate residents who have left Kuwait after September 1, 2019 can re-enter Kuwait as per a circular issued by Kuwait’s Directorate General of Civil Aviation DGCA allowing passngers to be abl... August 01, 2020 0 4953 Category: Kuwait

2,800 Departures And 1,470 Arrivals Within Two Days According to Alqabas Director of the General Administration of Civil Aviation M. Yousef Al-Fawzan revealed that the agencies operating at Kuwait International Airport have succeeded in implementing th... August 04, 2020 0 4057 Category: Travel

Kuwait Hottest Country In The World Sulabiya Area in Kuwait is Hottest in the World in Last 24 Hours with 52.4°C Kuwait, Iraq, Iran and Saudi Arabia ranked in the list of top 15 hottest cities in the last 24 hours, with 8 ar... August 01, 2020 0 3737 Category: Weather in Kuwait

Travel Packages For Expats Who Are Willing To Return From 31 Banned Countries Considering the current Pandemic situation all over the world,Kuwait has banned travel from 31 countries, so expats cannot return back to Kuwait from banned countries. Travel agencies are taking th... August 04, 2020 4 3604 Category: Travel

India Extends Ban On International Flights Till Aug 31 India on Friday extended the ban on international commercial passenger flights till August 31. But the restriction shall not apply to international cargo operations and flights specifically approved b... July 31, 2020 0 3584 Category: Information
Popular Offers