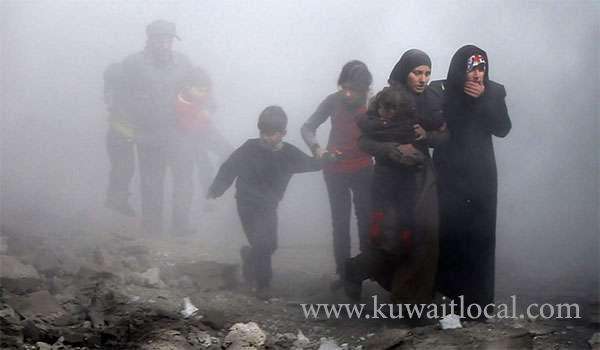 The UN Security Council is considering a draft resolution demanding a 30-day ceasefire in Syria to allow for urgent deliveries of humanitarian aid, according to the text seen by AFP on Friday.

Sweden and Kuwait presented the measure that would also demand an immediate end to sieges, including in Eastern Ghouta where a bombing campaign by government forces has killed more than 240 civilians in five days.

The proposed measure came a day after the council failed to back an appeal by UN aid officials for a month-long pause in fighting. Russian Ambassador Vassily Nebenzia said it was “not realistic” to impose a ceasefire because armed groups fighting Syrian President Bashar al-Assad’s forces were unlikely to uphold it. Russia has repeatedly blocked action in the council that would put pressure on its ally Assad.

Negotiations on the proposed measure are to begin on Monday and diplomats said it could quickly come to a vote at the council. It remained unclear whether Russia would resort to its veto to block the draft resolution proposing the 30-day truce, diplomats said.

The measure would decide “that all parties to the Syrian conflict shall immediately abide by a humanitarian pause and cessation of violence throughout Syria, for a period of 30 consecutive days,” according to the text. The draft demands that all sides allow medical evacuations 48 hours after the start of the humanitarian pause. Convoys carrying food, medicine and other vital supplies would be authorized to make weekly deliveries to civilians in need, in particular to the 2.9 million Syrians living under siege or in hard-to-reach areas.

UN aid officials accuse the Syrian government of blocking all aid convoys to besieged areas since January. Rights group accuse the Assad regime of resorting to starve-and-siege tactics against rebel-held areas. The draft resolution calls on all parties to “immediately lift the sieges of populated areas” and “cease depriving civilians of food and medicine indispensable for their survival.”

The UN humanitarian coordinator in Syria, Panos Moumtzis, on Tuesday called for the month-long ceasefire across Syria as fighting in Eastern Ghouta and Idlib escalated. Western powers have expressed alarm over the government’s bombing campaign in rebel-held Eastern Ghouta, where 400,000 people have been living under siege since 2013. UNICEF said dozens of children have reportedly been killed this week and that life under such heavy violence had turned into a “living nightmare” for children.

The draft resolution expresses “outrage at the unacceptable level of violence escalating in several parts of the country,” in particular in Eastern Ghouta and Idlib. Sweden and Kuwait, two non-permanent council members, are leading efforts to address the humanitarian crisis in Syria at the top UN body. More than 13.1 million Syrians are in need of humanitarian aid, including 6.1 million who have been displaced within the country during the nearly seven-year war.

Jet downed
Israel struck a dozen Syrian and Iranian targets inside Syria on Saturday in “large-scale” raids after an Israeli fighter jet crashed under fire from Syrian air defences in a severe increase in tensions, the military said. The confrontation was the most serious between arch foes Israel and Iran since the start of the civil war in Syria in 2011. Israel’s raids came after it intercepted what it said was an Iranian drone entering its airspace from Syria, which it labelled an “attack.”

It marked the first time Israel publicly acknowledged attacking what it identified as Iranian targets in Syria since the war began. In response, Iran denounced Israeli “lies” and said Syria had the right to self-defence in response to Israeli strikes. Separately, Iran issued a joint statement alongside the other main allies of the Syrian regime — Russia and Lebanese militant group Hezbollah — denying the allegations regarding the drone.

The Russian foreign ministry called for “restraint” from all parties. Israeli military spokesman Jonathan Conricus warned that Syria and Iran were “playing with fire,” but stressed his country was not seeking an escalation. “This is the most blatant and severe Iranian violation of Israeli sovereignty in the last years,” Conricus told journalists in a phone conference. Israel said its reprisals after the exchange were “large-scale” raids that attacked Syrian air defence systems and Iranian targets.

“Twelve targets, including three aerial defence batteries and four Iranian targets that are part of Iran’s military establishment in Syria were attacked,” a military statement said. Israel has repeatedly warned in recent weeks against the presence of Iranian forces in neighbouring Syria.

The Israeli pilots of the crashed F16 were alive, although one was severely wounded, the military said.

According to the Israeli military, the confrontation began with the drone entering its airspace before being intercepted by a combat helicopter.

Conricus said it was intercepted well inside Israeli territory over the city of Beit Shean, near the Jordanian border. He did not say whether the drone was armed or for reconnaissance, but alleged it “was on a military mission sent by Iranian military forces” from an “Iranian base” in the Palmyra area.