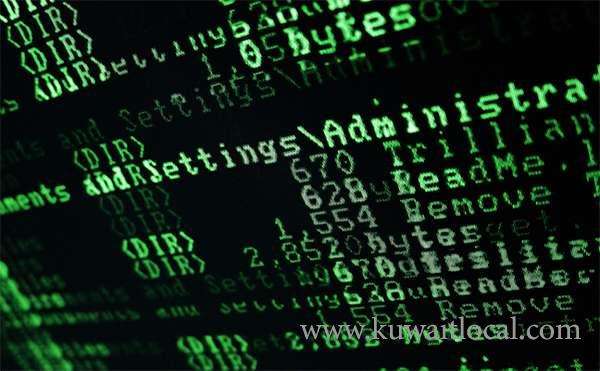 According to security experts cyber attacks have become very serious in recent times. It is like a war fought between international intelligence services and organized networks and e-gangs who want to steal sensitive information and security and military data either to spy on others or ask for ransom money, reports Al-Qabas daily quoting sources.

The experts have pointed out that tensions in the region, including Kuwait, have reached its peak since these unscrupulous elements have begun targeting big entities in the public and private sectors, and which have resulted in losses estimated to be in millions of dinars due hacking of bank accounts and encrypted information sold to unknown destinations.

According to the website of Kaspersky, the global leader in Cybersecurity, Kuwait has been subjected to 30,000 penetrations per day (or 210,000 penetration attempts within a week), through 10 types of viruses and electronic malwares between Sept 25 and Oct 1, 2019.

Kuwait is considered one of the target countries in the electronic warfare in the region, as it is exposed on a daily basis to attempts to penetrate being monitored which sometimes results in loss, both in the government and private sector, pointing to the serious motives behind those operations, most notably theft or access to data and sometimes information. The site pointed out that the most prominent of these attempts were hacking technology known as hacktool by 7.4 percent, followed by dangerous object technology 6.9 percent, in addition to hackers known as ransom and Trojan, which are encrypting data and trying to enter into negotiation with the other party to return it by requesting funds paid in virtual currency ‘Bitcoin’.

According to experts, the techniques used in the hacking operations are aimed at obtaining logins and passwords in the target sites or devices usually putting at risk the data of ATM card holders and bank accounts. The official sources said attempts continued to penetrate some sites of sensitive government agencies, where the recent attacks led to the monitoring of an attempt to penetrate the Ministry of Interior work system without indicating the loss of data and information except for interruption of work with some other government agencies.

On the subject of Public Authority for Civil Information (PACI) and the attempt to penetrate it, the sources pointed out that the affiliated technical and supervisory bodies are currently working on a report of the incident and how to deal with the attack. In the same context, experts and information security consultants agree that what is exposed to the websites of government agencies is the result of poor procedures adopted by some of those sites in addition to the employees who unknowingly facilitate the penetration.

The sources added that the lack of knowledge among government employees in the way of dealing with electronic systems and the transparency of government agencies and knowledge of the seriousness of what is exposed to the regulations and sufficiency, considering that what is going on a technical failure is one of the main causes of heavy losses, whether financial or information to which they are exposed