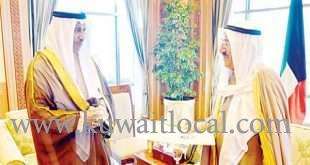 The Cabinet today reviewed His Highness the Amir’s latter appreciating the hard efforts by the different ministries and bodies for the Gulf Cooperation Council (GCC) 38th Summit Kuwait hosted recently.

His Highness the Amir welcomed the tremendous efforts exerted by His Highness the Prime Minister in the formation of the Cabinet, hailing at the same time efforts of the previous ministers who had worked tieressly in carrying out their responsibilities entrusted upon them, wishing them all the best. His Highness the Amir added that the new government formation comes amidst critical internal and external challenges which require wisdom and farsightedness to deal with, in addition to doubling of efforts in order to address such critical circumstances for the best interest of the homeland and its people.

His Highness also called on the new ministers to work as a one team based on cooperation, confidence and mutual respect between the legislative and executive branches, saying he was fully confident that the ministers would be able to achieve best interests of the dear homeland and citizens, wishing peace, stability and prosperity to prevail.