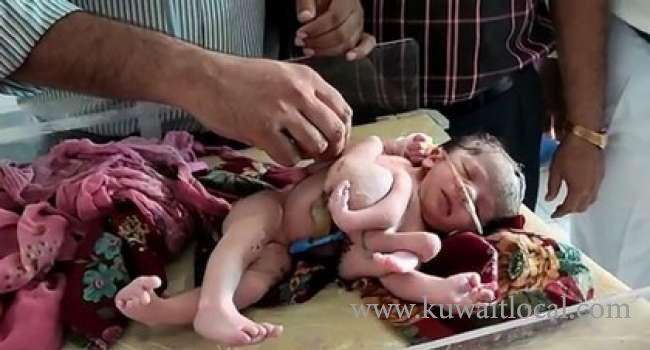 One triplet came out fine — the other two, conjoined.

An Indian woman has given birth to a girl with four legs and three hands in what doctors believe to be the first case of two naturally born triplets being conjoined.

“The male child is normal but the female is a case of conjoined twins,” says Dr. Rohitesh Meena,

Meena helped mom Raju Gurjar, 24, give birth in a Tonk, Rajasthan, hospital on Friday. The children were born at 2:46 a.m. Saturday — and Gurjar and husband Badhulal were shocked to see that their daughter had an extra set of limbs.

The first-time mom hadn’t been to any medical checks during her pregnancy. Doctors believe the additional hands and legs, which are attached to the girl’s abdomen, can be surgically removed.

“They had not gone for an ultrasound,” says Meena of the couple, who are both laborers. “They were distressed after the birth of the baby girl.”

In a video of the father listening to his child’s heartbeat, the weight of the additional leg on her chest clearly impacts the infant’s ability to breathe.

“She had a minor breathing issue. We put her on oxygen support and her vitals are stable now,” Meena says.