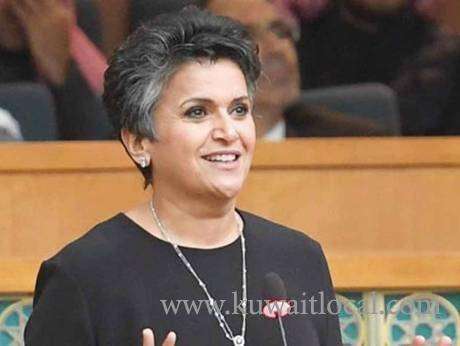 A Kuwaiti lawmaker claimed that out of the 1.3 million Kuwaitis, only one million were genuine while the remaining 300,000 had obtained the citizenship fraudulently.

“I applaud the efforts of the Ministry of Interior in trapping those who forged documents to obtain the Kuwaiti citizenship illegally,” MP Safa Al Hashem said.

“Should they pursue their efforts relentlessly to trap the rats who obtained the citizenship illegally, they will find 300,000 forgers and the number of genuine Kuwaitis will go back to its real level, which is around one million,” she said, quoted by Kuwaiti daily Al Rai on Wednesday.

Al Hashem was speaking amid reports about the discovery of new cases of foreigners, mainly Syrians, who obtained the Kuwaiti citizenship through forged documents often with the complicity of Kuwaitis who were paid for their illegal services.
;

On Tuesday, Kuwait’s Criminal Court sentenced a Saudi national to seven years in jail for obtaining the Kuwaiti citizenship fraudulently and swindling the state of KD 24,000. The court also ruled that the defendant be dismissed from his profession and pay a KD48,000 fine ahead of his deportation after serving the jail term. According to the case documents, the Saudi forged an official identification card to claim that he was a Kuwaiti citizen and then used it to join the Kuwaiti Navy.

He also falsified a school certificate and a driving licence to back up his Kuwaiti identity allegations. The court also sentenced six Syrian nationals to four years in jail for forging documents to obtain the Kuwaiti citizenship.

The defendants were also ordered to pay fines that are double the money they took illegally from the state. The six will be deported afterwards, the court said, Kuwaiti daily Al Rai reported on Wednesday. Investigations showed that one Syrian man forged official documents to claim he was a Kuwaiti national.

MP Al Hashem said that she was fully in support of the Interior Ministry’s endeavor to unmask citizenship forgers. “When I first talked about the cases of forged citizenship, many people refused to believe me and even accused me of exaggerating,” she said.

“Today, we all see how since Sheikh Mazen Al Jarrah was tasked with addressing the issue, forgers are being caught like rats. I initially thought there were around 62,000 forged citizenship cases, but now there are several facts that indicate that the figure is 300,000.”

Al Hashem, the only woman lawmaker in the parliament, said that the Kuwaiti citizenship was much coveted for its numerous advantages and benefits.

“The state is a generous caregiver while education, health and other services are free. If there were taxes in Kuwait and the state was not looking generously after its citizens, these greedy forgers would not covet its citizenship,” she said.