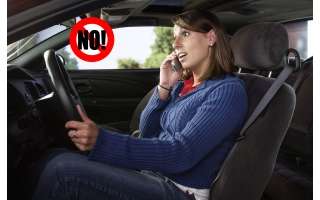 Saudi Interior Ministry has announced that motorists caught using their phones while driving would be jailed for 24 hours, and have their licenses suspended for traveling over 160 kmph on the nation’s roads.

Col. Abdulaziz Al-Luhaidan, head of the commission for the development of traffic bodies, made the announcement Monday on a radio program. Sixty people were penalized last month for this violation, he said.

Al-Luhaidan said that there would also be severe penalties for speedsters. No one has the right to overturn the commission’s rulings, including the head of the ministry’s Public Security division, he said.

Al-Luhaidan said the commission can issue rulings on 73 traffic violations, 11 concerned with offenses affecting public safety that can result in imprisonment. These include running red lights, driving in wrong side, driving under the influence, stunt driving, and obscuring number plates.

Meanwhile, Maj. Gen. Ali Al-Rasheedi, spokesman of the traffic police, said a driver found speeding would be sent three text messages, after which they will be asked to appear at the traffic office.

“If the person fails to appear at the given date and time, the department will automatically suspend all his traffic services, and slap a penalty,” he said.

According to Al-Rasheedi, the traffic department has already suspended services for a number of reckless drivers who exceeded the speed limit of 160 kmph. They have also been summoned by the police to face further action.

The action comes in the wake of a new mechanism called “blocking” which applies to those driving at high speed. They are not allowed to pay the fine through an ATM or online and must appear in person.

The traffic department has several online services including renewal of driver’s licenses, vehicle registration and insurance.