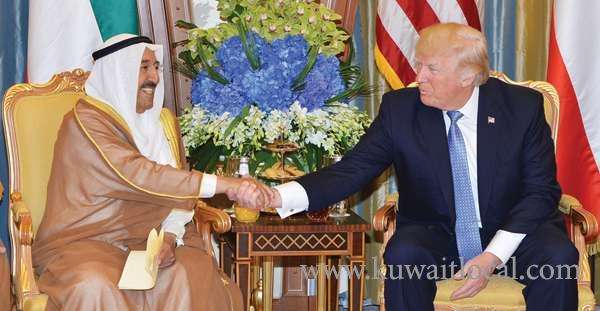 The visit provides an opportunity to exchange views on pressing regional challenges, building upon a face-to-face dialogue between the two leaders begun at last year’s USGCC Summit in Riyadh and continued at the Amir’s visit to the White House last September. His Highness’ visit is further proof that the strong relationship between the United States and Kuwait is growing even stronger.

The visit will witness the signing of several bilateral arrangements that will enhance the strategic ties and cooperation between our two countries, says a press release quoting the US Ambassador to Kuwait Lawrence Silverman.

Every day, cooperation between the United States and Kuwait makes both countries more secure and more prosperous. Commerce and investment between our two countries (both government and private) are growing; defense and security cooperation is enhancing mutual capabilities to keep our people safe and promoting long-term regional stability.

While the United States maintains its commitment to Kuwait’s security, US training and defense and security exercises further build Kuwait’s capacity to prevent terrorism and defend its territory. Increasing information sharing will help us both prevent the organization and financing of terrorist acts, of which we have both been victims.

Footsteps
Large numbers of Kuwaitis continue to visit the United States, and thousands of Kuwaiti students entering US universities follow in the footsteps of five generations of their fellow countrymen and women.

The United States welcomes Kuwaiti students. The quality education they earn is a fundamental investment in the intellectual capital of Kuwait. Our two countries agree that health care and the management of health care in Kuwait open new avenues for cooperation.

Today, we are working together to increase protection of the innovation and creativity produced by Kuwaitis and Americans – their intellectual property. That will help improve the business and investment environment in Kuwait and foster entrepreneurship – the keys to the country’s economic future.

The United States and Kuwait share concern for regional threats and the need for unity among partners to address those threats. We look forward to discussions with His Highness the Amir and his delegation in Washington regarding Iran, developments in Syria, Iraq, Yemen, the ongoing GCC dispute, and other issues. We look forward to working together further as members of the United Nations Security Council, and in making the work of the Council as effective as possible.

More broadly, the United States greatly appreciates Kuwait’s consistent efforts, as envisioned by His Highness, to use diplomacy to help stabilize the region and to provide humanitarian assistance throughout the world. Kuwaiti humanitarian assistance is more than charity; it is an investment in the long-term stability of its neighbors.

The United States and Kuwait have enjoyed a very productive year in our bilateral relations, highlighted by His Highness the Amir’s visit to the White House last September. We set ourselves ambitious goals and I am pleased to say that we met them in order to deepen and broaden that relationship.

I am confident that the Sept 5 meeting at the White House will mark the beginning of the next period of growth in our relations. In this regard, we look forward to Kuwait’s hosting of the Third US Kuwait Strategic Dialogue later this year. Since their formation in October 2016, the working groups charged with implementing ideas raised at our Strategic Dialogues have been busy advancing cooperation in defense, security, trade, investment, consular affairs and, of course, education. We expect new agreements, with new tangible benefits for our peoples, to be signed at this third Strategic Dialogue in Kuwait. I can assure you that the US Embassy in Kuwait will continue to work all year-round to bring new benefits to the Kuwaiti and American people.