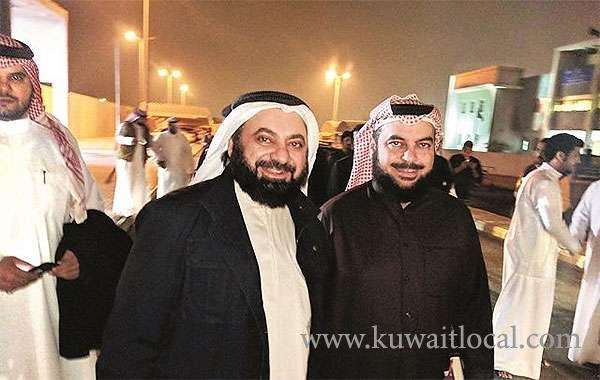 The Constitutional Court on Wednesday declared the unconstitutionality of Article 16 of the National Assembly’s internal regulations which stipulates cancellation of parliamentary membership according to Law No. 12/1963 and all ramifications were taken into consideration; thereby, pitting the legislative and judicial authorities against each other in terms of the separation of powers principle.

Speaker Marzouq Al- Ghanim refrained from commenting until the National Assembly Office receives an official letter on the verdict. Previously, the Assembly invoked Article 16 of its internal regulations and voted against the motion to cancel the membership of MPs Waleed Al- Tabtabaei and Jam’an Al-Harbash as the Court of Cassation sentenced them to three years and six months in prison for their involvement in the storming of the Assembly building in 2011.

Based on Article 82 of the Constitution and the Election Law, the MPs’ membership will be cancelled by default if the judiciary issues a verdict against them. This contravenes the parliamentary internal regulation which states that the fate of any member lies in the hands of the Assembly.

In a related development, MP Mohammed Al-Dalaal expects the judicial and legislative authorities to be at loggerheads over the issue, although they are merely exercising their respective powers. Article 50 of the Constitution stipulates that the government system shall be established on the basis of separation and cooperation of powers.

No authority shall be allowed to waive all or part of its jurisdiction as prescribed in the Constitution. Therefore, Al-Dalaal said if there is any directive to amend Article 16 of the internal regulations of the Assembly, it should be done through standard legislative channels, not through the judiciary; stressing the importance of respecting the separation of powers principle.

MP Yousef Al-Fadala asserted the Constitutional Court’s verdict proves that he was right in calling for unconstitutionality of Article 16 earlier; “but sadly, the Assembly succumbed to political pressure and voted against it while criticizing those who took another stance.’’

He argued the Assembly Office should look into Article 16 and find a solution in order to avoid recurrence of such situations. MP Riyadh Al-Adsani was among those who took another stance and he is now calling for the amendment of Article 16, especially since the Constitutional Court has flagged the violation.

He argued the Assembly should have invoked Article 84 of the Constitution and Article 18 of the internal regulations which address the vacancy of parliamentary seats and supplementary elections, instead of Article 16.

Meanwhile, a number of MPs met at the office of MP Al-Humaidi Al- Subaie to discuss the ramifications of the verdict; concluding that the matter at hand is complex and the elimination of Article 16 entails removal of some powers granted to the Assembly