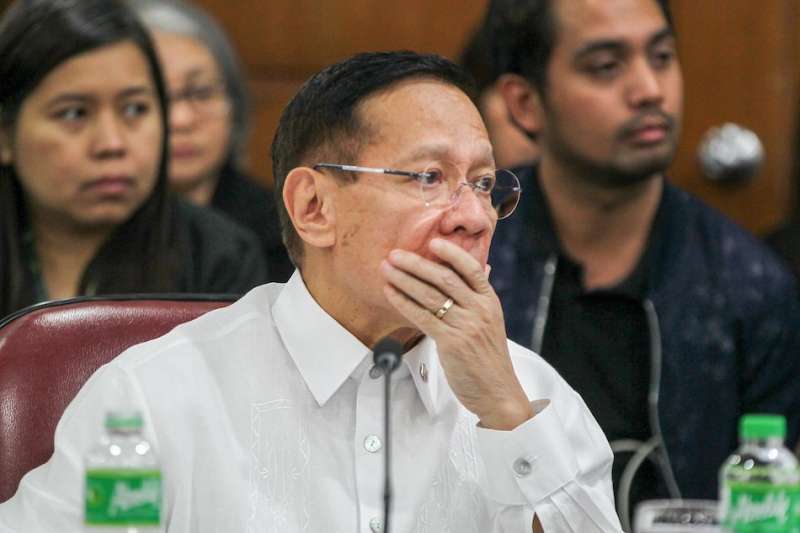 Several senators on Thursday filed a resolution calling for the resignation of Health Secretary Francisco Duque III for his "failure of leadership" in addressing the coronavirus crisis.

At least 14 senators signed Senate Resolution No. 362 against Duque, citing the health chief's "lack of foresight and inefficiency" as ground for his removal from office.

"Knowing fully well the danger posed by the COVID-19 pandemic in the beginning of the year, Secretary Duque failed to put in place the necessary precautionary measures to lessen, if not at all prevent, the impact of this health crisis," said the resolution, a copy of which was obtained by ABS-CBN News.

"Rather than providing enlightening viewpoint on the problems and challenges confronting the country in light of the COVID-19 pandemic, the present Secretary's actions... show lack of competence, efficiency, and foresight bordering on negligence in handling the health crisis," it said.

The following senators, mostly allied with the administration, signed the resolution:

The Department of Health did not only fail to immediately suspend travel to and from China, where the virus first emerged, but Duque even "warned [Congress] of the repercussions of banning flights," the resolution said.

While Duque "strongly recommended" a travel ban from Hubei province, the Health chief said the Philippines needs to wait for a risk assessment before implementing a total travel ban to China.

"We have to be very careful also of possible repercussions of doing this, in light of the fact that confirmed cases of the novel coronavirus are not limited to China," Duque told House members during a January 29 question hour.

After a Chinese tourist who arrived in the Philippines tested positive for the disease, contact tracing was "hampered and delayed" due to the DOH's "lack of coordination" with the Civil Aeronautics Board (CAB) and Civil Aviation Authority of the Philippines (CAAP), according to the resolution.

In February, Duque blamed 2 airlines for the delayed contact tracing, alleging that the carriers refused to coordinate with Health officials. Cebu Pacific and Philippine Airlines denied the allegations.

"Contact tracing was hampered and delayed possibly resulting in the failure to prevent the initial spreading of the virus," it said.

Senators who called for Duque's resignation also underscored how the DOH's lack of transparency worsened the coronavirus crisis in the country.

"Secretary Duque failed to alert the medical community and fundamentally the public, that there were already patients admitted in health facilities exhibiting COVID-19 symptoms, insisting in his press conferences that the Philippines had zero cases of local transmission, thus exposing many Filipinos, especially health care workers to the dangers of the disease."

Lawmakers admonished Duque for reprimanding health institutions and officials who spoke about the current state of their facilities and health workers during the coronavirus crisis.

"Secretary Duque even denounced the Cardinal Santos Medical Center (CSMC) for making a public disclosure that they initially admitted the first reported case of local transmission of COVID-19," the resolution noted.

Senators also criticized Duque for issuing a gag order against National Center for Mental Health (NCMH) chief administrative officer Clarita Avila after she told reporters that 34 staff members of the mental facility tested positive for COVID-19 due to the lack of personal protective equipment (PPEs).

"Secretary Duque showed lack of foresight by not immediately stockpiling and making the kits available to the general population," the resolution read.

"The Philippines has been among the countries with the highest rates of COVID-19-related infection and deaths of health care workers in the world" due to the DOH's failure to procure medical supplies in advance, the senators said.

"DOH's failure to provide adequate personal protective equipment for healthcare workers - as evidenced by the need to appeal for donations from private citizens - poses great hazard to the well-being of our frontliners," the resolution read.

The delayed release of information about new cases, as well as the late accreditation of testing centers have affected the ability of local government units to respond to the global pandemic, the lawmaker said.

"Due to the improper advice and manner of handling the present pandemic by our Department of Health officials, our country is foreseen to face quite negative dynamics in the coming weeks due to the inefficiency of government management," it read.

Contradicting policies also solidified allegations that there was a failure of leadership in the DOH, the senators said in their resolution.

The Inter-Agency Task Force (IATF) for the coronavirus crisis required people to wear face masks in public places despite Duque's earlier statement that healthy individuals do not need to wear personal protective equipment.

Senators also reprimanded the DOH for offering a P500 daily compensation for doctors, nurses and nursing assistants who responded to its call for volunteers as hospitals were overwhelmed with COVID-19 patients and suspect cases.

"The medical community felt insulted with such little consideration in exchange for putting themselves in harm's way... the rate is an insult to an already demoralized and exhausted workforce," the senators said.

Duque also "refused" to allow "graduates of medical schools to render medical sevices under special authorization" even if it was allowed under Section 12 of the Medical Act since there was already a "mounting death toll among health professionals."

The IATF eventually allowed medicine graduates yet to obtain their license to help out on a limited capacity.

Duque also "refused" to allow "graduates of medical schools to render medical sevices under special authorization" even if it was allowed under Section 12 of the Medical Act since there was already a "mounting death toll among health professionals."

The IATF eventually allowed medicine graduates yet to obtain their license to help out on a limited capacity.