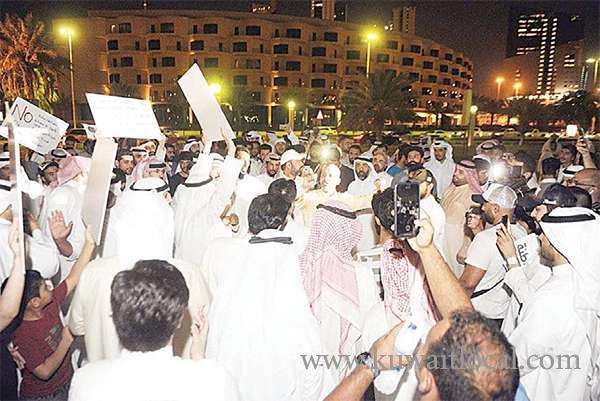 The issue of the illegal residents or the socalled bedoun is filled with suspicious activities because there are some people who want to exploit their cause and benefit even at the expense and the suffering of this denomination of people, reports Al-Rai daily.

This is because a large number of bedoun reject what is actually happening and have strongly resented the rush by some vested interests to make gains at their expense and portray them as a rebel category and outlaws. They say their fear to express their views publicly and rejecting what “a few who seem to have special goals and objectives attempt to twist the issue.”

In a separate statement to the daily, they expressed their fear of being subjected to a suspicious campaign of insult and betrayal. They preferred not to comment or mention their names, but did not hide their concern about the wrongful practices of demonstrators who take to the streets and issue threats. The focuses of illegal gatherings, which are difficult to control, discredit Kuwait abroad.

As for one group of the bedoun who are the majority, and who believe in the fairness of their position on the one hand and the seriousness of the government action in dealing with their situation on the other, remain calm, while the second group seeks to ignite crises and inflame the situation to make undue gains.

They have violated the law and this called for the intervention of the Ministry of Interior, which has referred a number of them to the Prosecution, which confirms that there are special agendas and goals that exceed the rights of the bedoun which is rejected by a majority.

They say demonstrations on the pretext of claiming their rights are unacceptable, and are forbidden as Sharia scholars issued a fatwa. They say “the rights should be demanded by peaceful means and not by going out to the street, or illegal gatherings that may involve people who want to gain from the cause, and this is what happens in the case of the bedoun where we find people who lead the scene on the pretext of rights, but in fact they have other goals.”

Bedoun remanded
The Public Prosecution ordered remand of 12 Bedoun to complete investigations after they underwent 16- hour questioning on charges of illegal gathering, calling and inciting others to gather, and misuse of mobile phone, says Al-Seyassah.

All 12 Bedouns were arraigned before the prosecution on several charges such as spreading false news, joining a group which calls for toppling the system of the country, calling for violence and offending friendly countries.

Kuwait Opens Airport. More Than 10,000 Tickets Cancelled As Kuwait opened its Airport for commercial operation today, according to reports, more than 10,000 tickets will be cancelled after the sudden decision to ban commercial aviation with 31 countries. ... August 01, 2020 0 8175 Category: Travel

Kuwait Bans Entry From 31 Countries Kuwait today expanded the list of countries, from which it is prohibited for people to enter Kuwait. As the Kuwait airport started commercial activities today, the Civil Aviation Authority announced t... August 01, 2020 0 5952 Category: Travel

India Signs Air Transport Bubble Agreement With Kuwait India and Kuwait have signed a transport bubble agreement which will enable air carriers to uplift stranded passengers both to and from India. However, since Kuwait has issued a temporary ban of re... July 31, 2020 0 5937 Category: Travel

List Of Travel Ban Countries May Change Continuously - Govt Spokesman The Kuwait Government spokesman Tariq Al-Muzaram said that there was no exception for those coming from any country to Kuwait from presenting the PCR certificate, which is mandatory according to healt... August 02, 2020 0 5226 Category: Kuwait

Expatriates Who Left Kuwait After September Can Now Return Expatriate residents who have left Kuwait after September 1, 2019 can re-enter Kuwait as per a circular issued by Kuwait’s Directorate General of Civil Aviation DGCA allowing passngers to be abl... August 01, 2020 0 5005 Category: Kuwait

2,800 Departures And 1,470 Arrivals Within Two Days According to Alqabas Director of the General Administration of Civil Aviation M. Yousef Al-Fawzan revealed that the agencies operating at Kuwait International Airport have succeeded in implementing th... August 04, 2020 0 4604 Category: Travel

Travel Packages For Expats Who Are Willing To Return From 31 Banned Countries Considering the current Pandemic situation all over the world,Kuwait has banned travel from 31 countries, so expats cannot return back to Kuwait from banned countries. Travel agencies are taking th... August 04, 2020 4 3792 Category: Travel

Kuwait Hottest Country In The World Sulabiya Area in Kuwait is Hottest in the World in Last 24 Hours with 52.4°C Kuwait, Iraq, Iran and Saudi Arabia ranked in the list of top 15 hottest cities in the last 24 hours, with 8 ar... August 01, 2020 0 3765 Category: Weather in Kuwait

India Extends Ban On International Flights Till Aug 31 India on Friday extended the ban on international commercial passenger flights till August 31. But the restriction shall not apply to international cargo operations and flights specifically approved b... July 31, 2020 0 3590 Category: Information
Popular Offers