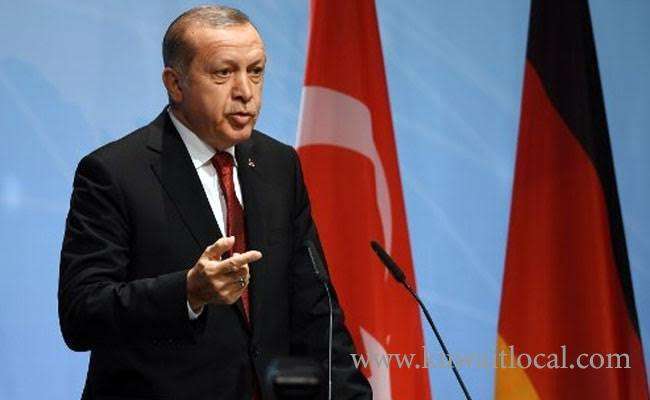 President Recep Tayyip Erdogan Sunday began a key trip to the Gulf aimed at defusing the standoff over Turkey’s ally Qatar, saying no one had an interest in prolonging the crisis.

Erdogan, whose country has come to Qatar’s aid in the dispute, had talks in Jeddah with King Salman who hailed the Turkish leader’s “efforts in the fight against terrorism and its financing,” Saudi state news agency SPA reported.

He also met Saudi crown prince Mohammed bin Salman before leaving for Kuwait for the second leg of his tour.

Erdogan was received by His Highness the Amir of Kuwait Sheikh Sabah Al-Ahmad Al-Jaber Al-Sabah, who has been mediating to resolve the crisis.

On June 5, Saudi Arabia, Bahrain, the United Arab Emirates and Egypt cut ties with Qatar, accusing it of backing extremism and fostering ties with their Shiite rival Iran.

Doha denies the claim and has been strongly backed by Ankara throughout the standoff.

The Turkish president will visit Qatar on Monday for his first face-to-face talks with Amir Sheikh Tamim bin Hamad al-Thani since the crisis began.

“No one has any interest in prolonging this crisis any more,” Erdogan said before leaving Istanbul.

He accused “enemies” of seeking to “fire up tensions between brothers” in the region.

Erdogan praised Qatar’s behaviour in the crisis, saying Doha had sought to find a solution through dialogue. “I hope our visit will be beneficial for the region,” he said.

The crisis has put Turkey in a delicate position, and Erdogan has repeatedly said he wants to see an end to the dispute as soon as possible.

In recent years, Qatar has emerged as Turkey’s number one ally in the Middle East, with Ankara and Doha closely coordinating over issues including the Syria conflict where both are staunch foes of President Bashar al-Assad.

Turkey is also setting up a military base in Qatar, its only such outpost in the region. It has expedited the process since the crisis began and reportedly now has 150 troops there.

“From the first moments of the Qatar crisis, we have been on the side of peace, stability, solidarity and dialogue,” said Erdogan.

But Turkey, which is also going through a turbulent time with the European Union and the United States, also does not want to wreck its own relations with regional kingpin Saudi Arabia.

“As the elder statesman in the Gulf region, Saudi Arabia has a big role to play in solving the crisis,” said Erdogan, taking care not to explicitly criticise the kingdom.

Erdogan said he supported the mediation efforts of Kuwait’s Amir, a possible indication Ankara sees Kuwait as the key to solving the crisis.

The Qatari Amir said Friday he was ready for talks to resolve the row as long as the emirate’s sovereignty is respected.

His call received a cold reception from the UAE’s state minister for foreign affairs, Anwar Gargash, who said he hoped the Amir had pledged to reconsider Qatar’s position.

“Dialogue is necessary, but it should be based on a revision” of Qatar’s stance, he tweeted.

Erdogan is likely to get a warm welcome in Doha where Turkey has been loudly applauded for sending in food, including fruit, dairy and poultry products by ship and by plane to help Doha beat an embargo.

Turkey has also benefited, with its exports to Qatar doubling in the past month to more than $50 million. According to the economy ministry, Ankara has sent around 200 cargo planes filled with aid since the crisis began.

Erdogan on Sunday reiterated his support for Kuwait’s mediation efforts exerted to resolve the Gulf crisis.

Speaking at a news conference before heading to Saudi Arabia in a tour to the Arabian Gulf area that would also take him to Kuwait and Qatar, Erdogan said His Highness the Amir of Kuwait Sheikh Sabah Al-Ahmad Al-Jaber Al-Sabah has played an important role in the region since taking office.

He also praised Kuwait’s role in resolving the current Gulf rift and expressed regret over the recent developments in the area.

Erdogan would also discuss several issues with Gulf leaders, including the Syrian file and strengthening of relations between Ankara and other Gulf capitals.