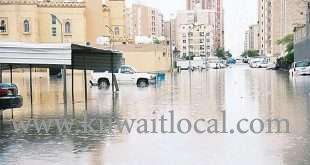 The Parliamentary Commission of Inquiry (PCI) is working on the final report of the crisis following heavy rains last November. The committee was commissioned by the National Assembly, reports Al-Rai daily quoting parliamentary sources.

All the current and former leaders, whether ministers or senior officials have been called because of the sanitation problem, the impact of heavy rains on the streets and the subsequent issue of flying gravel a problem that is not hereditary, but began in 2013 and remained unresolved despite the Ministry of Public Works was held by more than one minister.

The committee used the reports of the Audit Bureau in 2016 on the inefficient road maintenance by the Ministry of Works and the non-exploitation of the funds allocated to it, in addition to the report of the state audit bureau issued in 2017, which was prepared specifically on the evaluation of efficiency and effectiveness of the maintenance system for public roads in the state, and traditional systems in maintenance.

The Committee reviewed the report of the Audit Bureau 2016/2017 of the Ministry of Public Works, the shortcomings of a number of agreements related to the master plan for sanitation, and the shortcomings related to the construction of roads, bridges and sanitary sites. The Ministry of Public Works did not inspect the concrete mix at the governmental center of the approved standards and was dissatisfied with the Ministry’s response.

The sources pointed out that the weakness of the legal texts in the area of contracting to hold the main contractors or subcontractors responsible, which requires reconsideration of the provisions of the tenders law, which allows requalification of contractors not qualified to carry out the work as well as the lack of quality subcontractors