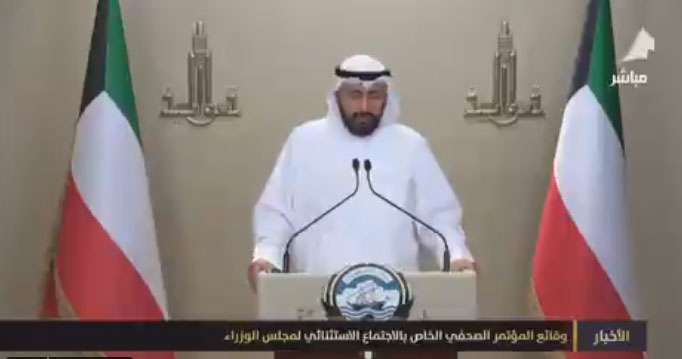 Kuwait Minister of Health Sheikh Dr. Basel Al-Sabah Thursday attributed big rise of Covid-19 infections among Kuwaitis to failure to comply with health instructions, which caused extension of the first phase of a plan to gradually restore normal life.

"We have reached the end of the first phase and we are supposed to move to the second phase, but there has been a big rise in infections among Kuwaitis which occurred due to failure to abide by health instructions," Sheikh Basel told an online news conference following a cabinet meeting.

He said many parents were infected with the virus even though they did not leave their homes, and some of them were in the intensive care units.

Earlier, the Government spokesman Tareq Al-Mezrem said that the government decided to change curfew hours to start at 7:00 p.m. until 5:00 a.m. starting morning of June 21. The government also decided to lift a lock down on areas of Hawally, Nuqra, Maidan Hawally and some blocks in Khaitan as of next Sunday.

The government, said Al-Mezrem, also allowed limited air travel for citizens with critical health conditions who should travel at their own expense.

Students who must travel to attend their tests will be allowed to do so, he said, as well as citizens who have foreign wife of husband abroad and the trip should be for 30 days minimum. Any person who wants to travel should submit a request for the Ministry of Interior 10 days before the trip, he said, and citizens should pay for their treatment in case of contraction of the virus.

The government compels passengers wishing to come to Kuwait to provide an Arab copy certificate he conducted a PCR test four days before the trip, providing he is clean of the virus, said Al-Mezrem.