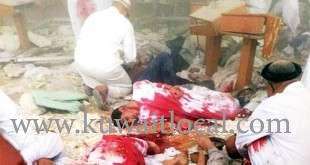 MP Adnan AbdulSamad has forwarded questions to Interior Minister Sheikh Khalid Al-Jarrah about the bombing of Al-Sadiq mosque, which led to the death of 26 innocent people and injured more than 200 others.

After condemning the measures taken by the Interior Ministry last week to arrest the Abdali cell convicts, AbdulSamad wondered why the ministry did not take similar action against those accused of involvement in the bombing of the mosque.  He wants to know why Kuwait did not demand for their extradition or ensure their arrest.  He requested for details including the names and nationalities of the accused, as well as the charges filed against them and court rulings.

He also inquired if the ministry distributed names and photographs of the accused at the borders and public facilities or published them on various media platforms, in addition to steps taken regarding two of the mosque bombing convicts arrested in Saudi Arabia.

An official statement published on the ministry’s website disclosed that Kuwaiti authorities handed over the brother of the two convicts, so he wants to know the brother’s name and if he committed other crimes or not.

He cited a report published by Annahar daily on July 9, 2015 that the Kuwaiti government formed a judicial delegation to visit Saudi Arabia and personally look into results of investigations with the convicts nabbed by Saudi security officers, so he wants to know what happened during the visit.

He asked about the rulings on State security cases which have not been implemented since 2000 till date, charges against those convicted, their names and nationalities, reasons for non-implementation of verdicts, and if these convicts are in Kuwait or not.

Chairman of parliamentary Foreign Affairs Committee MP Ali Al-Daqbasi expects the next stage to be different because he believes both the Parliament and government will have greater achievements.

He pointed out that the key to change is a new government formation with the ability to lay down a good vision, make wise decisions, protect public funds, and work towards continuous development to realize the aspirations of citizens.

He also expects remarkable changes in the Parliament due to the commitment of MPs to address a number of pending issues such as housing, bureaucracy and unemployment.