<![endif]-->
Advanced Search
Minister Of Affairs: Tamkeen Is One Of The Steps To Amend The Demographic Composition
Category: Kuwait 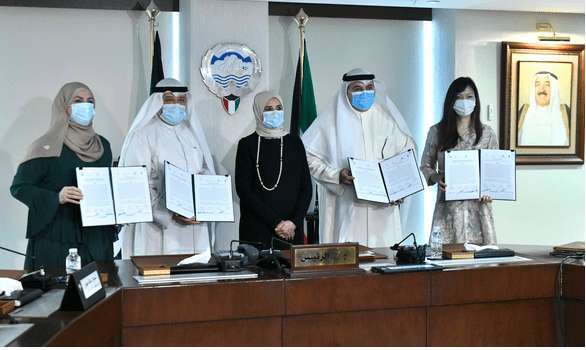 Minister of Social Affairs and Minister of State for Economic Affairs Maryam Al-Aqeel confirmed that the (Tamkeen) initiative is one of the steps to modify the demographics in the country as an important part of which its effects appeared during the new Corona pandemic (Covid-19).

This came in a speech delivered by Minister Al-Aqeel today, Thursday, on the occasion of the signing of the Tamkeen initiative between the General Secretariat of the Supreme Council for Planning and Development and the Public Authority for Manpower with the International Organization for Migration and the United Nations Development Organization in Kuwait.

Al-Aqeel said that the initiative contributes to strengthening the pillar of the global position of the State of Kuwait within the framework of its Kuwaiti National Development Plan (2035) by strengthening the national mechanisms for good governance of immigration and mobility and facilitating the movement of workers for an improved and improved employment experience.

She stated, “This stage is the first under the name (Tamkeen), which means fair employment of workers and enabling national labor recruitment agencies to update evidence-based policies and program national efforts aimed at improving institutional governance for expatriate workers.

She indicated that the updates that come through the initiative will address weaknesses in the current system that were evident during the (Corona) crisis.

She emphasized that the initiative will help fulfill national and international obligations by modifying safe paths for workers who work inside Kuwait and benefit them and business owners by complying with the standards that will be adopted.

Al-Aqeel commended the partnership efforts between the General Secretariat for Planning and Development and the Manpower Authority with the International Organization for Migration and the United Nations Development Program in the State of Kuwait.

For his part, Secretary-General of the Supreme Council for Planning and Development, Dr. Khaled Al-Mahdi, said in a press statement on the sidelines of the signature that the government has submitted an integrated project to the Human Resources Committee in the National Assembly to draw up a roadmap towards reforming labor market imbalances, whose effects will be reflected in modifying the demographics in the country.

Mahdi added that the Tamkeen document initiative is a major part of the program and project set by the Kuwaiti government and consists of several stages, the most important of which is the existence of an international system that applies international conditions and standards to approve the recruitment of workers into the country in what is called (the smart system).

He explained that the smart system works to improve the quality of the expatriate workers coming to the country and to ensure that those workers brought by the State of Kuwait meet international standards. Mahdi pointed out that the initiative’s first launch lies in introducing recruitment agencies and applying international standards to them before the entry of workers into the country, in addition to their contribution to promoting fair employment during labor markets.