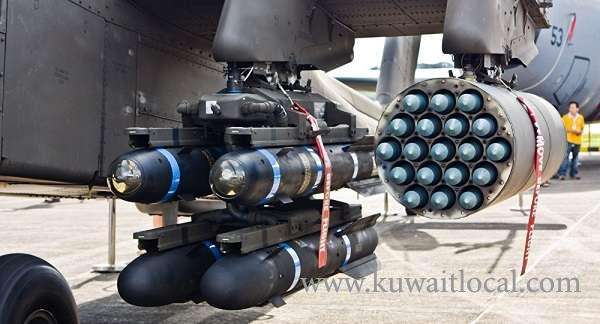 Ongoing regional conflicts in Yemen and the fight against the Daesh in Syria and Iraq, as well as Iran’s nuclear deal signed in 2015, which frees the country to import defense equipment by 2020, has led to a splurge in armament purchases by the six-nation Gulf Cooperation Council (GCC) states.

However, unlike previous military spending, what makes recent purchases more telling is the emphasis on offensive rather than just defensive weapons.

Items such as precision air-to-ground missiles, advanced guidance systems and air-to-air refueling equipment that extend the range and duration that jets can fly without landing to refuel, have been high on the list of purchases made in recent months by Saudi Arabia and its Gulf allies. The Gulf spending on military hardware also includes purchase of higher-end weapons systems, such as advanced naval frigates, attack helicopters, and defensive missile batteries.

The GCC states, and Saudi Arabia in particular, are worried that a resurgent Iran unbridled by economic sanctions will seek to increase its influence over the region by boosting the strength and capabilities of its ailing military, and in the process upset the regional balance of power.

Figures released by the US State Department in 2016 showed that the United States sold $33 billion worth of weapons to its Gulf allies since May of 2015. Elaborating on the sales, the then State Department spokesman David Mckeeby said, “Consistent with the commitments we made to our Gulf partners at the Camp David summit last May, we have made every effort to expedite sales.” He added that in the eleven months since then, the State Department had helped with the export of everything from attack helicopters to ballistic missile defense systems to precision guided munitions to the six-nation GCC states.

In 2015, the US delivered 4,500 precision guided munitions to GCC states, McKeeby revealed, including 1,500 taken from the US military’s own inventories. Precision munitions makers in the United States like Lockheed Martin, Raytheon, Boeing and General Dynamics, have all benefitted from the uptick in overseas sales. Lockheed alone has already received $18 million to bump its Hellfire missile production from 500 to 650 missiles per month. The company has also quadrupled the production of Paveway II laser-guided bombs, a favorite of the Saudi Royal Air Force.

According to leading defense industry information service HIS Jane’s, “Traditionally, military capabilities in the region have been focused on territorial defense,” but now Mideast states are increasingly acquiring equipment that will allow them to build “the kind of capabilities required to conduct operations beyond their borders.” Analysts at IHS say that military spending in the GCC, which had been in a decline since oil prices slumped in mid-2014, are expected to swell by 3 percent annually from 2018. The combined budgets of the six-nation bloc are projected to reach US$180 billion a year by that time.

In the region the biggest spender is Saudi Arabia, which last year had the fourth biggest defense budget in the world, only behind that of the US, China and India. The Kingdom’s recent purchases of a fleet of Panavia Tornado ground-attack aircraft and 72 Eurofighter Typhoon jet fighters ordered from BAE Systems are among the aircraft that could see upgrades in weapon systems that would allow them to project power over longer distances.

The Kingdom is also planning to increase its defense spending by 6.7 percent to $50.8 billion in 2017. Other Gulf states, which have already increased spending on missile-defense systems over the last five years in response to concerns about the threat from the Iran, are also likely to start spending heavily over the next two years, noted IHS.

Meanwhile, there have been faint, nevertheless audible, calls within GCC countries for a shift in defense spending and a new strategic approach to military capabilities, in order to protect the six-nation bloc from current and potential future threats. These voices have been urging the government to redirect some of its substantial financial resources, now being spent on acquiring foreign manufactured weaponry, towards creating an industrial base that can manufacture military hardware domestically.

“The Middle East’s biggest defense suppliers such as the US and the UK have encountered abrupt, political swings that place a significant degree of uncertainty on their defense and foreign policies,” says Anshu Vats, partner and head of public sector at global consulting firm, Oliver Wyman. He added that the GCC must focus on developing a domestic base of defense manufacturing to enhance the region’s capability to address a range of conventional and asymmetrical threats.

"With long held policies and agreements related to the overall security of the region now being re-assessed, GCC countries must plan for self-sufficiency in its defense and security as the only reliable way forward,” said Vats.