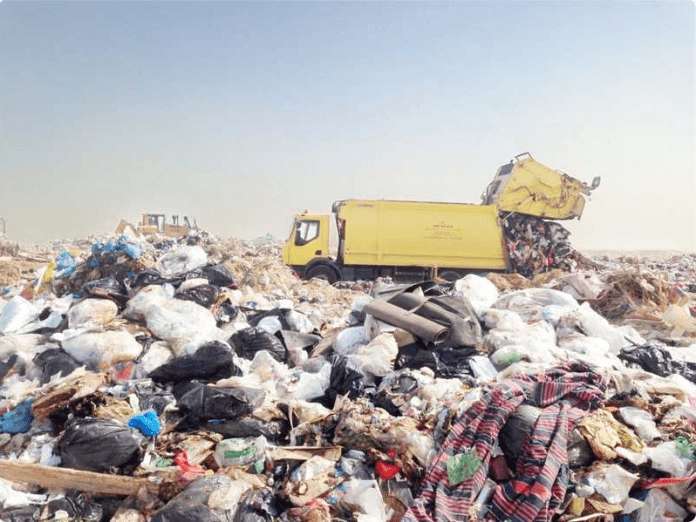 A recent report by the Environment Public Authority warns of the danger of "random disposal" of waste throughout the country, especially solid waste, and says that six landfills are "fully responsible for polluting Kuwait's air with gases," and that only three landfills emit 96% of the country's greenhouse gas emissions.

According to a local Arabic newspaper, the country has 19 landfills despite its small size, of which only three are active, while 11 are closed and contain 56 million cubic meters of waste.

Kuwait has landfills that pose an imminent health and environmental risk, and waste that accumulates and is incorrectly filled or disposed of at random, all of which are dangerous factors that can lead to the release of toxic gases and unpleasant odors, as well as the outbreak of fires, which can adversely affect the environment and health of Kuwaitians. The EPA revealed 6 landfills currently in operation, which received 75% of the total waste during the past decades, 3 of which receive municipal waste.

EPA officials said in a recent report, a copy of which the daily has obtained, that landfills in "Jahra", "South of the Seventh Ring Road" and "Mina Abdullah" weigh incoming waste and fill it without prior treatment, emitting 96% of the total amount of greenhouse gases. It said the “2040 national waste management strategy in the country” includes the prevention of landfills of untreated waste with a high organic content, which will represent a significant contribution to climate protection.

A total of 11 landfills containing 56 million cubic meters of waste were closed without completing their full rehabilitation. Despite their closure, the report indicated that the landfills still emit greenhouse gases and form leaching water resulting from waste many years after the last load was filled, which makes it necessary to monitor the sites carefully and rehabilitate them.

A source pointed out that reusing the land for closed landfills is limited because of the uncontrolled emissions of gases, which can cause explosions or fires, not to mention that the decomposition of waste in the soil makes it unstable and causes soil subsidence.

The EPA cited, for example, Jleeb Al-Shuyoukh, located directly next to Kuwait International Airport, and the extent of its impact on the airport, because the recent expansion of the airport necessitates taking into account the conditions of the landfill site, and on the other hand, the possibility of the dumped waste being a potential source of energy because it contains methane gas that can be used.”

The report pointed out that this landfill is engineered and equipped with an isolation system to prevent the intrusion of hazardous materials into the soil, and the materials entering it are being recorded and samples taken to check their properties.