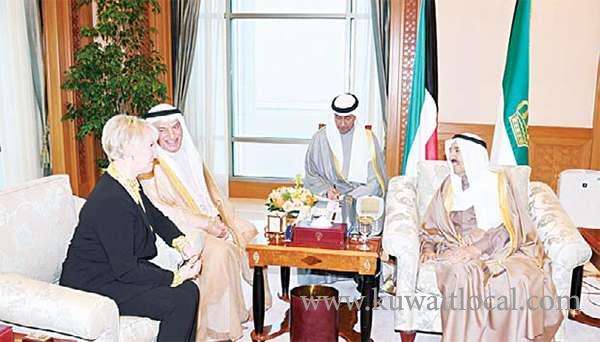 Kuwait has been very helpful in making, “we hope,” the talks on Yemen happen in Sweden very soon, said Swedish Minister for Foreign Affairs Margot Wallstrom on Monday.

“This is my second visit to Kuwait in a few years. I’m honored to meet with His Highness. It was a very interesting conversation about the role that Kuwait placed in the region. Issues like what goes on in Syria and, I would say, in the wider region,” were discussed, said Wallstrom in a statement after being received by His Highness the Amir Sheikh Sabah Al-Ahmad Al-Jaber Al-Sabah earlier at Seif Palace.

“We enjoyed excellent cooperation in the Security Council and we also have a good bilateral relation and we have agreed to strengthen that further,” she noted. “I think there is an enormous potential for more of investments and business between our two countries. It was in a very positive spirit and I brought a big ‘thank you’ to Kuwait also for the way we have been working together both on the current issue of Yemen and for working together in the Security Council.

“Kuwait already plays a historic role in the region advocating for peaceful solutions, for dialogue and contacts and I think that has become an even more important role as the world looks today and of course surrounded by big and powerful neighbors but still being able to keep up that objective of creating dialogue.”

Wallstrom concluded by hoping to “work together on that path in the future”. Meanwhile, wounded Yemeni rebels arrived at Sanaa airport to be flown to Oman for treatment in a ‘confidence- building’ measure Monday, as the UN envoy returned seeking to push ahead with planned peace talks. The evacuation on a UN chartered plane marks a key step in kickstarting stalled negotiations as world powers press for an end to the brutal four-year conflict that has pushed Yemen to the brink of famine.

Wounded Houthi rebels were transported across the capital, controlled by the Iran-backed insurgents since 2014, in ambulances as they made their way to the long-defunct Sanaa International Airport on Monday. Inside the airport departure hall, other wounded rebels – some in suits and wheelchairs – lined up awaiting their evacuation to Muscat. A security official inside Sanaa airport told AFP the rebels had begun to board the private, UN-supervised flight on Monday evening.

Coalition spokesman Turki al-Maliki confirmed the UN chartered flight would evacuate 50 wounded combatants, 50 escorts and a team of Yemeni and UN doctors to the Omani capital.

5 Year Residence For Expats And 10 Years For Expat Businessmen A new residency law will be introduced that underlines that an expat can acquire a residency visa for up to 5 years and for an expat businessman with a valid project, it is for 10 years. Among the ... August 12, 2020 2 7916 Category: Expats

Large Scale Expat Deportation Plan In Progress Planning is underway for the large scale arrest and deportation of around 126,000 expatriates living illegally in Kuwait, reports Al Jarida daily. They did not take advantage of the amnesty in April a... August 11, 2020 1 6696 Category: Expats

Only educated expats over 60 will have their residence renewed Public Authority for Manpower (PAM) has announced that expats at the age of 60 and above, without a university degree will need to make preparations to leave the country by end of this year. They are ... August 11, 2020 2 3216 Category: Expats

DGCA Did Not Receive Any Request To Bring Back Expats Stranded Abroad The government institutions did not send a request to make preparations for the return of expats stranded abroad, especially needed professions in Kuwait such as doctors, engineers, judges, other expe... August 13, 2020 0 2805 Category: Kuwait