Advanced Search
Telephone Call Provides You With A Domestic Worker, And It Costs You Only Two And A Half Dinars For An Hour
Category: Kuwait 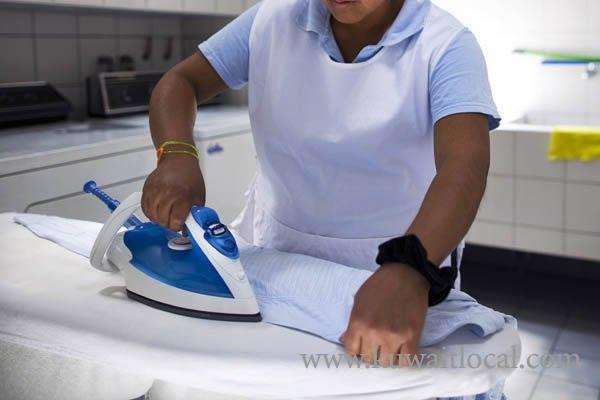 A telephone call provides you with a domestic worker, and it costs you only two and a half dinars for an hour, reports Al-Rai daily.

But it is not so easy to break the ground behind it, and before you make this move, which seems attractive to some, you have to find answers to a number of questions, including: How to ensure that this maid is free of diseases? How will you ensure that she will not commit a crime in a house that she enters for the first time for a few hours and leave? And finally, how do you get to it if you discover the theft of the contents of the house? Al-Rai carried its questions to stakeholders for their opinion.

They were very cautious about dealing with maids on the hourly-basis system, and explained that “this phenomenon is not legal and contravenes with the domestic labor law that regulates the work in this regard.” “This is illegal, and I do not know why the Ministry of Interior is silent about who commits this offense,” said Khaled Al-Dakhnan, head of the Kuwait Federation of Home Employment Workers, despite the fact that they publish their advertisements openly in e-media, despite the fact that this phenomenon is against the law and harmful to society.

Al-Dakhnan warned that “Kuwaiti families are not allowed to deal with domestic workers on the hourly basis because they result in many thefts. They also threaten the security of the house and a danger to health. “The four hours of work cost between 10 and 15 dinars,” he said, denying that “the high fees for recruiting domestic workers through offices is the reason for dealing with the hourly workers.”

“Official domestic labor is cheaper and much secure than the hour system. It also protects against the crimes that workers may commit in the hours system, which are difficult to deduce in the event of any violation. The owner of the house has no information about the person and only has her phone number.

As for his assessment of the availability of domestic workers before the month of Ramadan, Al- Hamdallah said this year is better than the previous years in terms of the availability of domestic workers. An Indian domestic worker named Fatima told Al Rai about her experience. “I have reached an agreement with my sponsor to allow me to work on the hourly basis in exchange for paying him KD 1,000 each year as well as cleaning his house on a daily basis.” She added, it is tiresome, but she has to work day and night to save the money for the sponsor and for the family back home to support their basis needs

Flights To India Awaiting Final Approval Special charter flights to Indian destinations are expected soon with the signing of the Transport Bubble between the two countries, a reliable source disclosed to The Times, Kuwait. It is expected... August 05, 2020 0 15660 Category: Information

The Airport Continues Its Commercial Flights According to Alqabas Kuwait International Airport continued to operate commercial flights for the fifth consecutive day, as 14 flights arrived in the country yesterday, while 16 flights departed. A re... August 06, 2020 0 7030 Category: Travel

2,800 Departures And 1,470 Arrivals Within Two Days According to Alqabas Director of the General Administration of Civil Aviation M. Yousef Al-Fawzan revealed that the agencies operating at Kuwait International Airport have succeeded in implementing th... August 04, 2020 0 5810 Category: Travel

Emirates Gets All Set To Relaunch Kuwait Services Dubai carrier also confirmed Lisbon as another destination being added in this rollout Emirates airline will resume passenger services to Kuwait’s capital from August 5. Flights from Dubai to K... August 05, 2020 1 4780 Category: Travel

KTTAA chairman criticizes abrupt decision to ban expats from 31 countries without prior notice Under the pandemic situation the decision was taken by Kuwait government to ban travel from 31 countries. Today Mohammad Al-Muthairi, the Chairman of the Board of Directors of the Kuwait Travel and To... August 05, 2020 0 4404 Category: International

Travel Packages For Expats Who Are Willing To Return From 31 Banned Countries Considering the current Pandemic situation all over the world,Kuwait has banned travel from 31 countries, so expats cannot return back to Kuwait from banned countries. Travel agencies are taking th... August 04, 2020 4 4238 Category: Travel

3 Stage Plan For Return of Expats - MOI High sources revealed Alqabas  that the return of residents to the country will take place according to 3 successive stages, during which priority will be according to the needs of the state, wit... August 07, 2020 0 3669 Category: Expats

Partial Ban Lifting Is Possible, But It Will Not Take Place Today Governmental sources revealed to Al-Qabas that the cabinet will discuss in its meeting today the health indicators of the Corona epidemic and its extent locally and globally, and accordingly will dete... August 03, 2020 0 3555 Category: Coronavirus

19 Dead and 127 Injured after Air India flight crashlands in Kozhikode, breaks into two 19 passengers died and 127 were injured, including 15 seriously, when a plane coming from Dubai met with an accident at Karipur airport in Kozhikode, Malappuram Superintendent of Police (SP) said on F... August 07, 2020 0 3537 Category: India