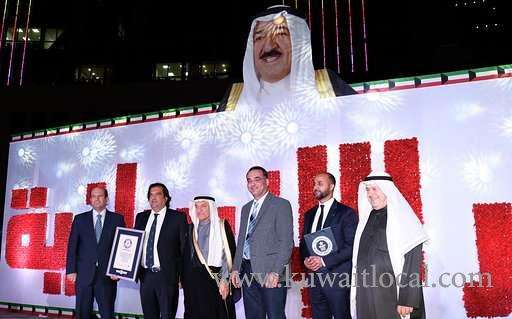 His Highness the Amir Sheikh Sabah Al-Ahmad Al-Jaber Al-Sabah’s representative attended a celebration by the Catholic Church in Kuwait, for Guinness World Records (GWR) approving a mural of Humanitarian Leader with artificial flowers.

The ceremony started with the national peace followed by Ambassador of Lebanon to Kuwait Dr. Jean Macaron delivering a speech, commending the prevailing love and respect of His Highness the Amir across the world, who gives and does not take as a humble leader.

There is no global consensus on the love of a leader similar to that of His Highness the Amir who revived and is still promoting the common human values, he said.

He described His Highness the Amir as a leader of initiatives and a man who guides the world towards a better future for humanity.
Everyone is proud of His Highness the Amir for his humanitarian achievements, which were characterized by his quest for peace, he said.
The frescoes decorated with flowers are a token of love, appreciation and paying tribute to His Highness the Amir, who has strong wisdom and deep visions.

This initiative, which comes from AVoNA, reflects the nature of coexistence, respect and appreciation that Kuwait grants to the people with faith and conviction rooted in the history of Kuwait, since its inception for freedom of faith, equality and rejection of violence and terrorism as one of the most important foundations that guarantees security, stability and well-being of the people, in line with human rights.

The objectives and justifications that led the Catholic Church to grant this manuscript and the adoption of GWR shows the role of His Highness the Amir as holder of the title as world humanitarian leader, which was granted to him by the Secretary-General of the UN in a unique precedent.
Finally, this celebration will remain significant to Kuwaitis and residents, showing their appreciation for the services, projects and humanitarian initiatives of His Highness the Amir to all those in need in the world without distinction.

They showed gratitude to the committee organizing this ceremony, judges of GWR, Ambassador of Lebanon and to the audience for this gathering and remarkable ceremony, then a musical titled Ya Kuwait was played.
GWR announced the results of the successful manuscript of the mural representing leadership of humanity, the most artificial roses at 6,200