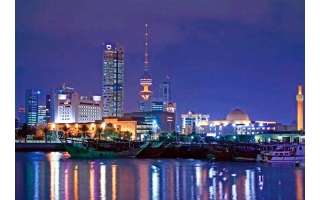 KIPCO is ready to fund construction of its planned $5 billion real estate project in Kuwait, but is open to bringing in partners to help speed up completion, its vice chairman said on Tuesday.

The 380,000-square-metre development on the edge of Kuwait City, in an area where several foreign embassies are located, was said to be among the largest real estate projects ever planned in the country when announced in September. Ayyar said it was awaiting the necessary municipality approvals for the project but was hopeful of securing these by the end of this year, with construction beginning in early 2016.

"We have no problem with the financing to complete the project but if there is an investor that carries the vision, we will be happy to partner and maybe the seven years in which the project will finish will become five years," Ayyar said in the summit interview.

Largest scale infrastructure and construction schemes have struggled to get off the ground in Kuwait because of political infighting and cumbersome bureaucracy.

With state coffers under pressure due to the lower oil price - it is predicting a budget deficit of 8.18 billion dinars ($27 billion) for the 2015-16 fiscal year - Kuwait has been implementing a number of reforms to ease foreign investment and unclog the project pipeline.

These include a new public-private partnerships law and changes to an unpopular offset scheme requiring international investors to allocate 35 percent of the value of many government contracts to local businesse ventures. KIPCO, one of the Gulf's most prominent private sector businesses with interests in industrials, media, financials and real estate, reported a 17 percent rise in third-quarter net profit on Monday.

Ayyar said the company was on course to achieve a 15 percent net profit increase this year, as its diversity and reputation helped it to overcome any impacts from the main negative forces impacting the Middle East.

"The company's portfolio is very diversified and we are working in multiple markets that do not depend on oil -- countries such as Tunisia and Jordan have benefited from falling oil prices," he said. KIPCO has presence in 24 countries, of which 17 are in the Arab world.

Of the political and security uncertainty, the impact has been "limited" and it has not halted any KIPCO projects in the last five years except in Syria, Ayyar said, adding its profits from Iraq have actually been on the rise. Burgan Bank, which is 64.4 percent owned by KIPCO, has been one of its more expansive businesses, buying into Turkey and targeting the United Arab Emirates, Saudi Arabia and Egypt to increase the size of its international operations.

However, Ayyar believed expansion was no longer a priority for the bank, with the focus now on absorbing what it had taken on. One business that would continue expanding was Takaud, its Bahrain-based pensions and savings business, which Ayyar believed would experience strong growth as it targeted opening in 10 new markets in the next five years.

Flights To India Awaiting Final Approval Special charter flights to Indian destinations are expected soon with the signing of the Transport Bubble between the two countries, a reliable source disclosed to The Times, Kuwait. It is expected... August 05, 2020 0 16282 Category: Information

The Airport Continues Its Commercial Flights According to Alqabas Kuwait International Airport continued to operate commercial flights for the fifth consecutive day, as 14 flights arrived in the country yesterday, while 16 flights departed. A re... August 06, 2020 0 7583 Category: Travel

19 Dead and 127 Injured after Air India flight crashlands in Kozhikode, breaks into two 19 passengers died and 127 were injured, including 15 seriously, when a plane coming from Dubai met with an accident at Karipur airport in Kozhikode, Malappuram Superintendent of Police (SP) said on F... August 07, 2020 0 5824 Category: India

KTTAA chairman criticizes abrupt decision to ban expats from 31 countries without prior notice Under the pandemic situation the decision was taken by Kuwait government to ban travel from 31 countries. Today Mohammad Al-Muthairi, the Chairman of the Board of Directors of the Kuwait Travel and To... August 05, 2020 0 4528 Category: International

3 Stage Plan For Return of Expats - MOI High sources revealed Alqabas  that the return of residents to the country will take place according to 3 successive stages, during which priority will be according to the needs of the state, wit... August 07, 2020 1 4189 Category: Expats

Ministry Of Health Prepared The List Of Expats Who Are Struck Outside The Country Health Ministry is developing a inventory  of its employees, who are stuck outside the country and  are unable to return to Kuwait thanks to restrictions imposed  due to coronavirus pan... August 06, 2020 1 2954 Category: Kuwait