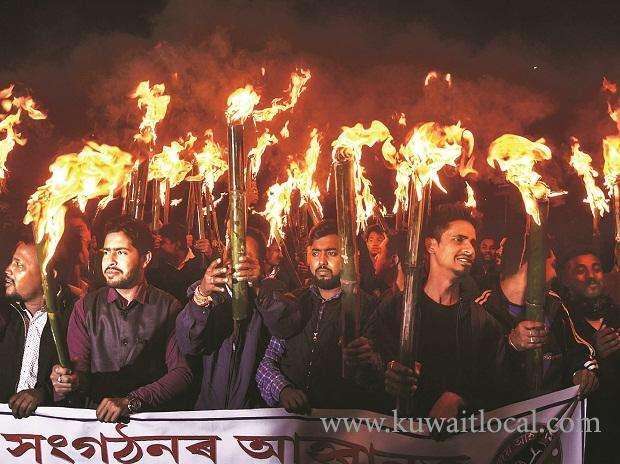 India’s parliament is set to approve legislation preventing Muslim migrants from neighboring countries from receiving citizenship -- the next step in Prime Minister Narendra Modi’s hardline Hindu nationalist program and one that’s seen to go against the nation’s secular constitution.

The controversial citizenship bill has sparked protests and fear around India, with lawyers working overtime to help millions at risk of being left stateless in the world’s largest democracy.

The Citizenship Amendment Bill is listed to come before India’s Parliament for approval on Monday. The proposed changes will allow citizenship for Hindus, Sikhs, Buddhists, Jains, Parsis, and Christians who illegally migrated to India from Afghanistan, Bangladesh, and Pakistan. It excludes Muslims and immigrants from India’s non-Muslim majority neighbors.

If passed as expected, the move threatens the secular foundation of the world’s second-most populous nation and its constitution that treats all religions equally. As for Modi, it’s a third major move out of his right wing playbook since retaining power earlier this year that adversely affects the country’s Muslim minority population.

On Aug. 5 India scrapped nearly seven decades of autonomy in the Muslim-majority region of Kashmir. Just three weeks later in the northeastern state of Assam some 1.9 million people, mostly Muslims, faced the risk of losing their Indian citizenship as Modi’s government seeks to enforce a National Register of Citizens to weed out illegal migrants. In November, Hindus won the Supreme Court case over a religious site disputed for centuries in northern city of Ayodhya. Modi’s Bharatiya Janata Party had promised a grand temple there.

“This is a clear sign that the Hindu right in India have been emboldened to push forward with their agenda,” said Katharine Adeney, director of the University of Nottingham Asia Research Institute who specializes in South Asia politics and ethnic conflict. “What it will do is to contribute to a growing sense of insecurity for the Muslim populations across India,” Adeney said, noting it was “hugely symbolic and undermines the neutrality of the Indian state to its religious groups.”

A spokesman from the Home Ministry on Friday declined to answer questions on the legislation, saying he might comment once the bill is tabled in parliament.

Anas Tanveer is traveling across the country, organizing workshops to raise awareness to ensure people are prepared for the changes, particularly among Muslims and poor sections of society.

“The Citizenship Amendment Bill is the first step toward a change in the nature of the nation,” said Tanveer, a lawyer working against the proposed law who runs the Indian Civil Liberties Union. “This is the government of India saying that India is the custodian of all the Hindus,” he said. “People are either unaware or they are very scared. No one wants to face a this kind of situation.“

Critics say the bill is divisive and targets Muslims. Activists have organized protest meetings and sit-ins in various cities including Hyderabad, Lucknow, Mysore, Pune, Bengaluru and New Delhi. If approved by the Parliament, the law is also likely to be challenged in the courts.

The government says the changes are intended to protect religious minorities escaping persecution from neighboring Muslim-majority countries. Home Minister Amit Shah has defended it, saying Muslims do not face persecution in Afghanistan, Pakistan and Bangladesh and therefore do not qualify. “If someone comes here to earn a livelihood or to disrupt law and order, then they are intruders,” Shah said in recent a TV interview.

The changes in citizenship law and the National Registry of Citizens intended to expel illegal immigrants were key election promises by Modi’s Bharatiya Janata Party. Shah had clarified in election rallies that Hindus, Sikhs, Jains and Buddhists don’t have to fear the changes and will not have to leave India.

When the proposed nationwide National Register of Citizens is prepared, people excluded from the list will be required to prove their Indian citizenship before a tribunal or risk detention or deportation. Last month, the government informed the Parliament that 988 so-called foreigners were being held in six detention centers in Assam.

This will be the second attempt by the Modi administration to amend citizenship law. In January, the legislation was passed in the lower house of parliament but lapsed as the upper house didn’t take it up.