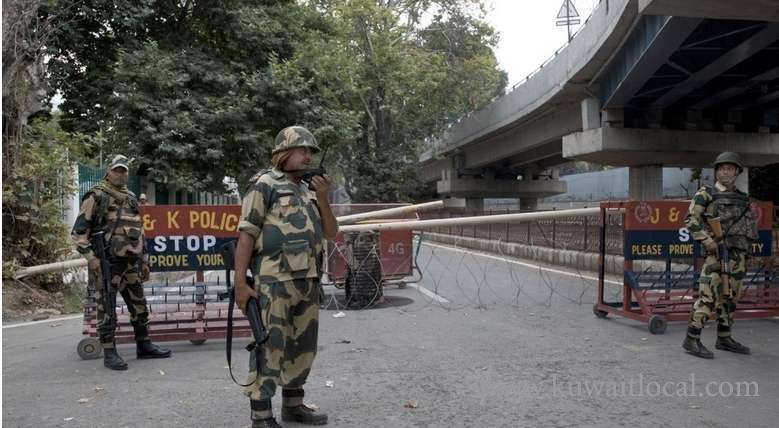 The Himalayan region's biggest mosque, the Jama Masjid, was ordered closed and people were only allowed to pray in smaller local mosques so that no big crowds could gather, witnesses said.

Kashmir has been in a security lockdown for eight days as the government in New Delhi seeks to snuff out opposition to its move to impose tighter central control over the region.

Internet and phone communications have been cut and tens of thousands of troop reinforcements have flooded the main city of Srinagar and other Kashmir Valley towns and villages.

Authorities had eased restrictions temporarily on Sunday to let residents buy food and supplies for Eid, one of the most important festivals of the year.

Residents said the security crackdown had made them too fearful to celebrate.

The decision by New Delhi has also sparked fury in Pakistan, with Prime Minister Imran Khan asking earlier Sunday if the international community was just standing by as Indian Hindu nationalism spread into Kashmir.

Khan tweeted on Sunday that the "ideology of Hindu Supremacy, like the Nazi Aryan Supremacy, will not stop" in Kashmir.

Describing the move he said it would lead to "the suppression of Muslims in India & eventually lead to targeting of Pakistan".

Indian premier Modi insisted last week the decision to strip Kashmir of its autonomy was necessary for its economic development, and also to stop "terrorism".

Under its previous constitutional autonomy, Kashmiris enjoyed special privileges such as the sole right to own land or take government jobs and university scholarships.

With Kashmir now fully part of the Indian union, Modi said the region would enjoy more jobs and less corruption and red tape, adding that key infrastructure projects would be expedited.

Kuwait Airways Begins Bookings For 17 Destinations From Aug 1 Kuwait Airways opened bookings for 17 destinations as part of the operation schedule for its flights from 01 Aug, 2020 The national carrier will begin flying to Amman, Bahrain, Bodrum, Baku, Beirut... July 05, 2020 1 16306 Category: Travel

Kuwait Airways Releases Operational Schedule To 31 Destinations Kuwait Airways released an operation schedule for its flights including travel destinations, mentioning the 31 destinations, departure and arrival times in Kuwait time, in addition to the number of da... July 04, 2020 0 15280 Category: Travel

With Public Transportation Halted, Private Cars Operate As Taxis In Kuwait As life slowly returns to normal in Kuwait, traffic has surged due to the ongoing closure of public transportation. This is because personal cars have been transformed into taxis to provide transporta... July 06, 2020 0 7824 Category: Kuwait

PACI Announces The List Of Services Available From Sunday The Public Authority for Civil Information PACI announced the list of services available online starting from Sunday. According to the list, update personal photo for Kuwaiti and Non- Kuwaiti, Newborn... July 04, 2020 1 7601 Category: Kuwait

New Expat Bill May Force 8 Lakh Indians to Leave Kuwait A total of 8 lakh Indians may be forced to leave Kuwait as its National Assembly committee has approved a draft expat quota bill seeking to reduce the number of foreign workers in the Gulf country. ... July 06, 2020 0 5838 Category: Kuwait

PCR Certificate Is Not Free For Departures The Supreme Committee for the Re-operation of Commercial Trips has adopted the Ministry of Health’s protocol on health controls and requirements to leave citizens and residents and come to Kuwai... July 03, 2020 1 5503 Category: Coronavirus

Indians Not To Exceed 15%, Egyptians, Filipinos Cap At 10% The Legislative Committee said it approved during its meeting yesterday a proposed ‘quota’ for various nationalities as per the percentages specified in the proposal, reports Al-Seyassah d... July 04, 2020 0 5347 Category: Expats

PCR Test Cost For Departures Between 10 KD – 20 K A responsible government source revealed from August 1st expats will be allowed to return back to Kuwait as per the government plan to gradually resume commercial flights. All the travelers will ne... July 05, 2020 0 4517 Category: Coronavirus