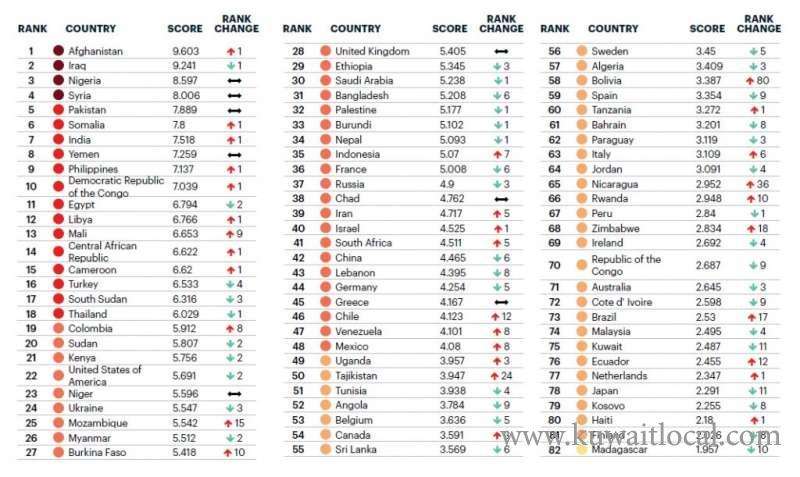 Kuwait advanced 11 places in the index of countries most affected by terrorism in 2019, ranking 75th this year compared to 64th position in 2018, reports Al-Qabas daily.

The country came fourth in the Gulf after Oman, which ranks among the safest countries in the world in 161st position. Qatar is 133rd and the Emirates 130th, and with Bahrain in 61st position, while Saudi Arabia took 30th place.

Afghanistan, Iraq, Nigeria, Syria and Pakistan topped the first 5 places on the index, while it considered countries such as Belarus, Guinea-Bissau, Gambia, North Korea, and Singapore to be the least affected by terrorism.

Egypt also witnessed a significant decline in terrorist attacks from 169 attacks in 2017 to 45 attacks last year as a result of fighting terrorism in the Sinai region, considered the terrorist strongholds of ISIS. On the other hand, Morocco and Iran were the only countries in the Middle East and North Africa that deteriorated in 2018.

The Institute said: The Middle East and North Africa region registered a significant improvement for the third year in a row, with massive improvement of security conditions in 17 countries across the region.