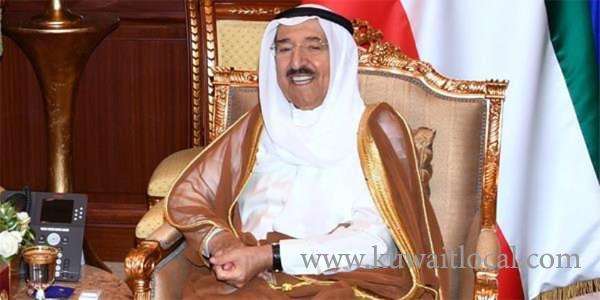 His Highness the Amir Sheikh Sabah Al-Ahmad Al-Jaber Al- Sabah is due to depart Sunday to Saudi Arabia, heading the Kuwaiti delegation for the the 39th Gulf Cooperation Council (GCC) summit, hosted in Riyadh.

His Highness the Amir also sent a cable of congratulation on Saturday to Saudi King Salman Bin Abdulaziz Al- Saud, marking the fourth anniversary of his ascension to the throne. In the cable, His Highness the Amir asserted on the deep and solid relations between Kuwait and the Kingdom, and lauded the prominent development renaissance in various fields under the leadership of the Saudi king.

His Highness the Amir also wished the Saudi King well-being and success in pursuing prosperity to the Kingdom and serving both Arab and Muslim worlds.

Meanwhile, Saudi capital Riyadh is getting ready to welcome its guests from delegations participating in the 39th Gulf Cooperation Council summit due on Sunday.

The Kingdom of Saudi Arabia is hosting a large number of reporters to cover the event, which is expected to address important issues related to GCC joint action in the field of politics, defense, economy and law. Flags have been raised on streets and welcoming billboards have been hung along the roads and bridges.

These meetings do much to add “crucial achievements that ensure the intent of its leaders to move forward in bolstering the bloc and strengthening its unity and integration,” GCC Secretary General Al-Zayani told Saudi Press Agency. Speaking about the role of the Custodian of the Two Holy Mosques on this, he said it stems from his wise leadership and his commitment to boosting the multi-lateral relations, achievements, security and stability of the bloc. The regional bloc has already made great achievements on the “political, security, defence-related, economic and social spectrums,” he highlighted. And Gulf leaders are committed to “doubling these efforts, bolstering their cooperation and boosting the GCC’s prominent status on the regional and global scales.”

The Riyadh-held talks will discuss several topics in relation to joint action, mainly on “political, economic, security-related and legal aspects, in addition to developments in the region and current political affairs and international reactions to these affairs.” The leaders will shed light on economic integration, added Al-Zayani, pointing out to the importance of establishing a GCC Common Market.

The move would encourage “economic citizenship,” he explained, granting GCC nationals equal rights in mobility, ownership, employment and the pursuit of business and profession as well as access to healthcare, education and social services.

As for the already-established GCC Customs Union, he said it led to an increase in joint trade to around $133 billion in 2017. The GCC has also been able to expand its relations with international partners through strategic dialogue and productive action plans, he mentioned.

“Today, it stands as a crucial and effective partnership on the regional and international stages as it assumes a productive role in strengthening the region’s security and stability as well as stabilising the global economy,” added the GCC chief. The Gulf leaders are expected to weigh a slew of weighty subjects and matters pertinent to the Gulf bloc, along with integrity and cooperation in political, defensive, economic and legal realms.

The following is a chronology of the 38 Gulf summits since the GCC was created in 1981: The first and second Gulf summits were held in Abu Dhabi and Riyadh in May and November 1981 respectively. The third summit was held in Manama in 1982, while the fourth and fifth took place in Doha and Kuwait in 1983 and 1984 respectively. Muscat hosted the sixth GCC gathering in 1985, followed by the seventh in Abu Dhabi in 1986 and the eighth in Riyadh in 1987.

Manama hosted the 15th Gulf meeting in 1994, and the following two events took place in Muscat and Doha in 1995 and 1996. The 18th version of the annual Gulf gathering was hosted by Kuwait in 1997, followed by the 19th in Abu Dhabi in 1998, the 20th in Riyadh in 1999, the 21st in Manama in 2000, the 22nd in Muscat in 2001 and the 23rd in Doha in 2002. The 24th summit was held in Kuwait in 2003, while the 25th version took place in Manama in 2004 under the title: “Zayed Summit” to pay tribute to the late UAE president Sheikh Zayed bin Sultan Al-Nahyan thanks to his major contributions and efforts in serving Gulf, Arab, Muslim and world causes. Abu Dhabi played host to the 26th conference in 2005, which was called: “King Fahad Summit” in appreciation for the late Saudi king Fahad bin Abdulaziz Al-Saud’s great role in the promotion of Gulf, Arab, Muslim and international issues.

In 2006, Riyadh hosted the 27th version entitled: “Sheikh Jaber Summit” as a sign of appreciation and gratitude to the late Amir Sheikh Jaber Al-Ahmad Al-Jaber Al-Sabah for his great role in creating the GCC and serving Arab and Muslim issues, along with regional and world peace. Doha and Muscat hosted the 28th and 29th Gulf events in 2007 and 2008 respectively.

The 399th summit in Riyadh is hoped to come up with constructive and fruitful outcomes that would prop up Gulf cooperation and integration in various domains, and fulfill the Gulf people’s expectations for closer ties and firmer coordination in order to address all challenges and safeguard regional security and stability.