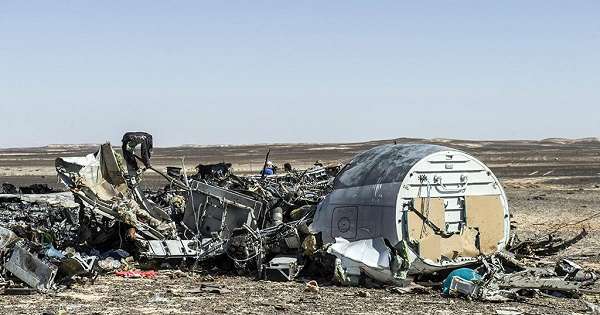 Russian jet broke up in mid air, too early for conclusions, official says Moscow-based aviation agency said on Sunday after visiting the disaster site, but stressed it was too early to draw conclusions from this.

Russian authorities also ordered Kogalymavia airline, operator of the Airbus A321 which came down on Saturday killing all 224 people on board, not to fly its jets of the same model until the causes of the crash are known.

The jet, which Kogalymavia flew under the brand name Metrojet, was carrying holidaymakers from the Red Sea resort of Sharm el-Sheikh to St Petersburg when it crashed into a mountainous area of central Sinai shortly after losing radar contact near cruising altitude.

"The destruction happened in the air, and fragments were scattered over a large area of around 20 square kilometers," said Viktor Sorochenko, director of the Intergovernmental Aviation Committee. However, he warned against reading anything into this information. "It's too early to talk about conclusions," he said on Russian television from Cairo. The Moscow-based committee represents governments of the Commonwealth of Independent States, which groups Russia and other former Soviet republics.

Egyptian analysts began examining the contents of the two "black box" recorders recovered from the airliner although the process, according to a civil aviation source, could take days. However, Russian Transport Minister Maxim Sokolov told Russia 24 television that this work had not yet started.

At St Petersburg's Pulkovo Airport on Sunday, grieving Russians piled flowers high in memory of their dead compatriots. Mourners in Moscow arranged candles to spell out 7K-9268, the number of the flight that crashed.

Carriers from United Arab Emirates, Qatar, Bahrain and Kuwait said they would re-route flights over Sinai as a security precaution until there was more clarity. Abu Dhabi's Etihad Airways said it would continue to overfly the peninsula but avoid airspace over certain areas on the advice of Egyptian authorities.

A militant group affiliated to Islamic State in Egypt said in a statement that it brought down the plane "in response to Russian airstrikes that killed hundreds of Muslims on Syrian land", but Sokolov told Interfax news agency the claim "can't be considered accurate".

Egyptian President Abdel Fattah al-Sisi said it could take months to establish the truth behind the crash though his country was cooperating with Russia to aid investigations. "This is a complicated matter and requires advanced technologies and broad investigations that could take months," Sisi said in a televised speech on Sunday. The wreckage was found in a desolate area of stony ground.

Rescuers had collected the colorful suitcases of the passengers into a pile. A pink child's sandal decorated with white flowers lay among the debris, a reminder that 17 children were among those killed as they headed home from their holidays.

Parts of the wreckage were blackened and charred, with one section forming heaps of twisted metal, although the blue Metrojet logo was still visible on its broken tail fin. As the Russian investigators moved slowly across the site, Egyptian military helicopters buzzed overhead, combing the wider area for debris - or bodies - not yet found.

At least 163 bodies had already been recovered and transported to various hospitals including Zeinhom morgue in Cairo, according to a cabinet statement. Airport security sources said Russian experts who arrived on Saturday brought with them refrigerators and DNA samples to help identify and take home the dead.

Russian experts had already visited the morgue on Saturday night and Moscow's ambassador to Cairo said the first 130 bodies were due to leave on Sunday evening bound for St Petersburg. A source inside the morgue said the bodies had been numbered using bracelets, ready to be received by the Russians, and empty ambulances were arriving to pick them up.

Those on board the doomed flight included 214 Russians, at least three Ukrainians and one Belarusian, most returning from the Red Sea, popular with Russians seeking winter sun. The Russian flag was flying at half-mast over the country's embassy in Cairo on Sunday morning. President Vladimir Putin has declared a day of national mourning in Russia.

Russia's transport regulator said in a statement that it had grounded Kogalymavia's Airbus A321s until the reasons for the crash became clear. Russian transport prosecutors have already examined the quality of the fuel used by the airliner and found that it met necessary requirements, Russia's state-run RIA news agency said.

The crew had also undergone medical tests recently and no problems were detected, Interfax reported. Experts from Airbus have begun arriving in Egypt to assist in the investigation, the civil aviation ministry said.

Emergency services and aviation specialists resumed early on Sunday their search at the crash site which is spread over more than 15 square km, with 100 Russian emergency workers helping them recover bodies and gather evidence.

Islamic State, the ultra-hardline group that controls large parts of Iraq and Syria, has called for a holy war against both Russia and the United States in response to airstrikes on its fighters in Syria.

Sinai is the scene of an insurgency by militants close to Islamic State, who have killed hundreds of Egyptian soldiers and police and have also attacked Western targets in recent months. Much of the Sinai is a restricted military zone. Militants in the area are not believed to have missiles capable of hitting a plane at 30,000 feet.

Islamic State websites have in the past claimed responsibility for actions that have not been conclusively attributed to them. Officials say there is no evidence to suggest so far that a bomb could have brought down the plane.

Three carriers based in the United Arab Emirates airlines - Emirates [EMIRA.UL], Air Arabia AIRA.DU and flydubai - said on Sunday they were re-routing flights to avoid flying over Sinai. Two of Europe's largest carriers, Lufthansa (LHAG.DE) and Air France-KLM (AIRF.PA), have already said they would avoid flying over peninsula while awaiting an explanation of the cause.

Sherif Fathy, Chairman of EgyptAir, said the national carrier had taken no such action. "I heard some other companies may be doing this, but I don’t think it’s justified,” he said.

The A321 is a medium-haul jet in service since 1994, with over 1,100 in operation worldwide and a good safety record. It is a highly automated aircraft relying on computers to help pilots stay within safe flying limits.BAirbus said the A321 was built in 1997 and had been operated by Metrojet since 2012. It had flown 56,000 hours in nearly 21,000 flights.

The aircraft took off at 5:51 a.m. Cairo time (0351 GMT) and disappeared from radar screens 23 minutes later, Egypt's Civil Aviation Ministry said in a statement. It was at an altitude of 31,000 feet (9,400 meters) when it vanished from radar screens.

According to FlightRadar24, an authoritative Sweden-based flight tracking service, the aircraft was descending rapidly at about 6,000 feet (1,800 meters) per minute when the signal was lost to air traffic control.

5 Year Residence For Expats And 10 Years For Expat Businessmen A new residency law will be introduced that underlines that an expat can acquire a residency visa for up to 5 years and for an expat businessman with a valid project, it is for 10 years. Among the ... August 12, 2020 2 8043 Category: Expats

Large Scale Expat Deportation Plan In Progress Planning is underway for the large scale arrest and deportation of around 126,000 expatriates living illegally in Kuwait, reports Al Jarida daily. They did not take advantage of the amnesty in April a... August 11, 2020 1 7141 Category: Expats

After Days Of Waiting, First Flight Left To India From Kuwait Today After a long wait of more than three weeks, the flight to India resumed from Kuwait international airport today with the first flight carrying 322 Indians stranded here to Delhi. The flight, arrang... August 11, 2020 0 6398 Category: Kuwait 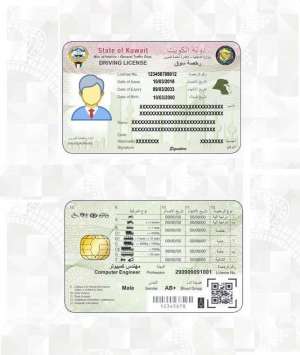 Ban On 31 Countries To Continue - No Request To Bring Expat Workers From Any Ministries The Supreme Committee for the Restoration of Commercial Flights at Kuwait International Airport held a meeting yesterday to review the procedures for flights operations. Volume 0% According to the... August 13, 2020 0 3349 Category: Travel

Only educated expats over 60 will have their residence renewed Public Authority for Manpower (PAM) has announced that expats at the age of 60 and above, without a university degree will need to make preparations to leave the country by end of this year. They are ... August 11, 2020 2 3262 Category: Expats

Steps To Apply For A Driving License In Kuwait