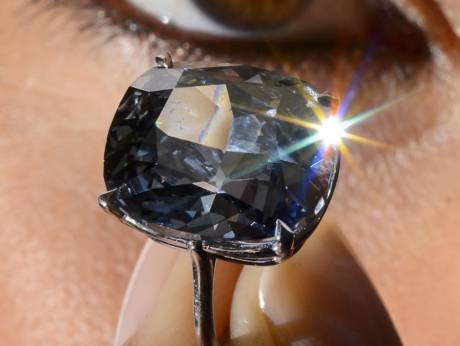 Hong Kong tycoon buys daughter $48m diamond in an auction in Geneva, his spokeswoman confirmed on Thursday. Property tycoon Joseph Lau, who last year was found guilty of bribery in neighbouring Macau, bought the rock at a Sotheby’s auction on Wednesday and immediately renamed it “The Blue Moon of Josephine” after his seven-year-old daughter.

The sale comes the day after he spent $28.5 million buying a rare 16.08-carat pink diamond — the largest of its kind to ever go under the hammer — from rival auction house Christie’s, which he renamed “Sweet Josephine”. A Hong Kong-based spokeswoman for Lau confirmed the two purchases.

“The first was the pink one ‘Sweet Josephine’ and the second one was the ‘Blue Moon of Josephine’,” she said. David Bennett, head of Sotheby’s international jewellery division, said the “Blue Moon” sale broke several records, making the gemstone “the most expensive diamond, regardless of colour, and the most expensive jewel ever sold at auction”.

The previous world record for a jewel sold at auction was held by the 24.78-carat “Graff Pink” diamond, which was sold by Southeby’s for $46.2 million in November 2010. This is not the first time Lau has bought rare jewels for his daughter. In 2009, he reportedly spent $9.5 million on another blue diamond, which he renamed the “Star of Josephine”.

Josephine is his daughter with girlfriend and former aid Chan Hoi-wan, according to local media. The 64-year-old also has two children with long-time partner Yvonne Lui. In March last year, he was found guilty of bribing a former minister in the gambling enclave of Macau in an attempt to purchase a prime development site.

Lau, who was not in Macau for the sentencing, is unlikely serve time as the two semi-autonomous Chinese cities do not have an extradition agreement. He was locked in a telephone bidding war for eight minutes for “Blue Moon” before the hammer went down, with the precious jewel staying within its pre-sale estimate of $35-55 million.

The diamond was discovered in South Africa in January last year and was the largest cushion-shaped blue stone in the fancy vivid category to ever appear at auction. Experts say the market for coloured diamonds has grown increasingly robust and both the blue and pink diamonds garnered a lot of attention in the run up to this week’s jewel sales in Geneva.

Flights To India Awaiting Final Approval Special charter flights to Indian destinations are expected soon with the signing of the Transport Bubble between the two countries, a reliable source disclosed to The Times, Kuwait. It is expected... August 05, 2020 0 14723 Category: Information

2,800 Departures And 1,470 Arrivals Within Two Days According to Alqabas Director of the General Administration of Civil Aviation M. Yousef Al-Fawzan revealed that the agencies operating at Kuwait International Airport have succeeded in implementing th... August 04, 2020 0 5449 Category: Travel

List Of Travel Ban Countries May Change Continuously - Govt Spokesman The Kuwait Government spokesman Tariq Al-Muzaram said that there was no exception for those coming from any country to Kuwait from presenting the PCR certificate, which is mandatory according to healt... August 02, 2020 0 5345 Category: Kuwait

Emirates Gets All Set To Relaunch Kuwait Services Dubai carrier also confirmed Lisbon as another destination being added in this rollout Emirates airline will resume passenger services to Kuwait’s capital from August 5. Flights from Dubai to K... August 05, 2020 1 4354 Category: Travel

Travel Packages For Expats Who Are Willing To Return From 31 Banned Countries Considering the current Pandemic situation all over the world,Kuwait has banned travel from 31 countries, so expats cannot return back to Kuwait from banned countries. Travel agencies are taking th... August 04, 2020 4 4059 Category: Travel

KTTAA chairman criticizes abrupt decision to ban expats from 31 countries without prior notice Under the pandemic situation the decision was taken by Kuwait government to ban travel from 31 countries. Today Mohammad Al-Muthairi, the Chairman of the Board of Directors of the Kuwait Travel and To... August 05, 2020 0 4055 Category: International

The Airport Continues Its Commercial Flights According to Alqabas Kuwait International Airport continued to operate commercial flights for the fifth consecutive day, as 14 flights arrived in the country yesterday, while 16 flights departed. A re... August 06, 2020 0 3998 Category: Travel

Partial Ban Lifting Is Possible, But It Will Not Take Place Today Governmental sources revealed to Al-Qabas that the cabinet will discuss in its meeting today the health indicators of the Corona epidemic and its extent locally and globally, and accordingly will dete... August 03, 2020 0 3496 Category: Coronavirus 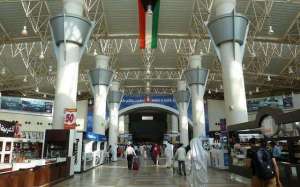 450 Passengers Arrived From Egypt And 120 From Beirut According to Alqabas the number of flights that arrived at Kuwait International Airport, from 4 countries that were included in the commercial flight ban, was 4. A source said that there ... August 02, 2020 0 3015 Category: Travel
Popular Offers