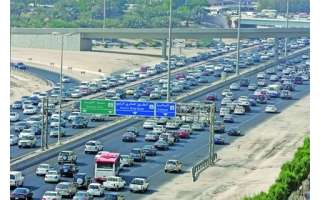 TomTom has announced the launch of its traffic service in Kuwait, extending its reach in the region, and adding to existing coverage in Saudi Arabia and the UAE.

TomTom Traffic includes congestion forecasting, which indicates whether a jam is growing or dispersing and estimates how long a delay will last.

“Traffic congestion is an issue for many countries around the world, including Kuwait,” said Ralf-Peter Schäfer, head of traffic at TomTom.

“The launch of TomTom Traffic gives drivers, the automotive industry and governments a concrete way to tackle traffic congestion in their market. Our aim is to help drivers get there faster and support governments to better manage traffic flow.”

Morning peak travel times on the routes from Ring Road No. 5 into the centre of Kuwait City are double, on average, due to traffic congestion, according to TomTom Traffic data.

7am to 8am on workdays (Sunday-Thursday) is generally the worst hour for traffic in the morning, the data also showed.