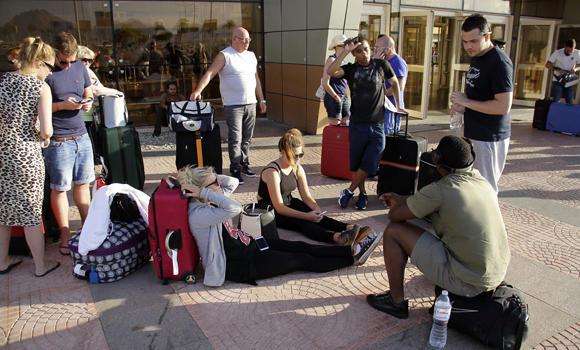 Thousands more foreign tourists flew home from Egypt’s Sharm El-Sheikh Monday after the downing of a Russian airliner claimed by terrorists, as police killed a top militant in the capital. The militant, Ashraf Ali Hassanein Al-Gharabli, was shot dead in an exchange of fire after police tried to arrest him in Cairo, the Interior Ministry said in a statement.

There were no indications Gharabli, a top operative of Daesh, group, may have been involved in a possible bombing of the aircraft, but he had been implicated in a string of attacks including the murders of a Croat and an American, both oil workers.

Daesh’s branch in the Sinai claimed responsibility after the Russian Airbus crashed on Oct. 31 in the Sinai Peninsula while en route from Sharm El-Sheikh to Saint Petersburg, killing all 224 people on board.

Russia’s Prime Minister Dmitry Medvedev admitted Monday that the plane crash was possibly a terrorist attack. “The possibility of an act of terror is of course there as the reason for what happened,” he said in an interview to Rossiyskaya Gazeta state newspaper.

Britain and the United States, as well as international investigators, suspect a bomb exploded on board, but Egyptian officials insist there is no evidence yet of an attack on the plane. Tens of thousands of foreign tourists, including some 80,000 Russians and 20,000 Britons, were stranded in the resort after flights were canceled over security fears.

Moscow said Monday that about 25,000 Russian tourists had returned, on more than 100 flights.

A spokeswoman for Prime Minister David Cameron’s office said some 5,000 Britons had returned so far. “We would expect to kind of keep up the pace of the last few days in the coming days in terms of number of flights returning. We are continuing to work with the Egyptian authorities and the airlines on this,” the spokeswoman said.

A security official at the airport gates said hundreds of tourists had flown out since Monday morning, most of them Russians, as buses drove up with a steady flow of holidaymakers. Plainclothes officers stood guard across the coastal resort, outnumbering tourists near some beaches.

Flight numbers have been limited because both Russia and Britain have banned tourists from bringing their check-in luggage, which will be flown home separately. That restriction has prompted Egypt to limit the number of daily repatriation flights because it says there is only so much baggage its airports can accommodate.

The crash has led to calls for greater security at airports in regions near where terrorists are operating. It has also raised fears for Egypt’s vital tourism industry, which had already been suffering from years of unrest. Derek Moore, chairman of the Association of Independent Tour Operators, told AFP that concerns over a bomb could dissuade British tourists from visiting during the peak holiday period in December.

“Even offering rock-bottom prices will not achieve that if there is a feeling that a trip to Sharm might result in death,” he said.

Residence Transfer Of Children To Mother Stopped The General Administration of Residency Affairs decided to stop transferring the residency of the children to their mothers in cases where the father has left the country permanently or his residence ... July 31, 2020 0 8149 Category: Kuwait

Kuwait Opens Airport. More Than 10,000 Tickets Cancelled As Kuwait opened its Airport for commercial operation today, according to reports, more than 10,000 tickets will be cancelled after the sudden decision to ban commercial aviation with 31 countries. ... August 01, 2020 0 8100 Category: Travel

Kuwait Bans Entry From 31 Countries Kuwait today expanded the list of countries, from which it is prohibited for people to enter Kuwait. As the Kuwait airport started commercial activities today, the Civil Aviation Authority announced t... August 01, 2020 0 5864 Category: Travel

India Signs Air Transport Bubble Agreement With Kuwait India and Kuwait have signed a transport bubble agreement which will enable air carriers to uplift stranded passengers both to and from India. However, since Kuwait has issued a temporary ban of re... July 31, 2020 0 5787 Category: Travel

List Of Travel Ban Countries May Change Continuously - Govt Spokesman The Kuwait Government spokesman Tariq Al-Muzaram said that there was no exception for those coming from any country to Kuwait from presenting the PCR certificate, which is mandatory according to healt... August 02, 2020 0 5096 Category: Kuwait

Expatriates Who Left Kuwait After September Can Now Return Expatriate residents who have left Kuwait after September 1, 2019 can re-enter Kuwait as per a circular issued by Kuwait’s Directorate General of Civil Aviation DGCA allowing passngers to be abl... August 01, 2020 0 4879 Category: Kuwait

Expats From 7 Banned Countries Can Enter Kuwait If They Have Stayed In Other Permitted Country For 14 Days The Directorate General of Civil Aviation stated that residents from the seven declared countries (Bangladesh, the Philippines, India, Sri Lanka, Pakistan, Iran, Nepal) is not related to the citizensh... July 30, 2020 0 4842 Category: Expats 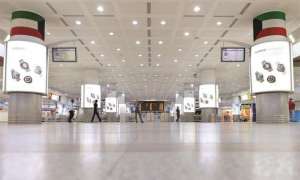 Kuwait Hottest Country In The World Sulabiya Area in Kuwait is Hottest in the World in Last 24 Hours with 52.4°C Kuwait, Iraq, Iran and Saudi Arabia ranked in the list of top 15 hottest cities in the last 24 hours, with 8 ar... August 01, 2020 0 3660 Category: Weather in Kuwait

India Extends Ban On International Flights Till Aug 31 India on Friday extended the ban on international commercial passenger flights till August 31. But the restriction shall not apply to international cargo operations and flights specifically approved b... July 31, 2020 0 3562 Category: Information
Popular Offers