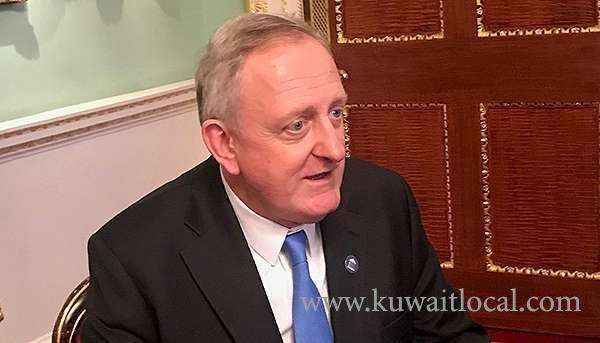 Peter Kenneth Estlin, Lord Mayor of the City of London, was leading an economic delegation on a visit to Kuwait on Saturday to explore ways for enhanced economic and commercial relations between Kuwait and the United Kingdom.

The agenda of the visit includes meetings with high-level officials in the Kuwaiti government and head of the Kuwait Investment Authority (KIA) as well as leading business people, he said in statements to KUNA on Friday.

The meetings will focus on how to maximize benefit from the available investment opportunities whether in the public or private sectors, he said. The State of Kuwait is an important partner of the UK; its sovereign fund in London and KIA play a leading role in the field of overseas investment, Estlin pointed out.

Both countries enjoy historical deeprooted relations; they are preparing for grand celebrations this month to mark the 120th anniversary of the Anglo- Kuwaiti Agreement, signed on January 23, 1899, he noted. After visiting Kuwait, the Lord Mayor of the City of London will head for Abu Dhabi to meeting business leaders in the UAE and discuss the investment opportunities in the UK in the post-Brexit era, particularly in the area of new technologies.

The service trade markets in the State of Kuwait and the United Arab Emirates are among the world’s fastest growing markets, he said, noting that British service trade with both countries hitting GBP 1.5 billion (or $1.92 billion) and GBP 5.6 billion ($7.18 billion), respectively, last year.

The British service trade scored a growth rate of nearly 76 percent with Kuwait and 90 percent with the UAE in the last decade, Estlin said, adding that the visits of his delegation to both countries seek to reach win-win outcomes.

Asked about the possible impacts of Brexit on the City of London, he said believes that the British economy is strong enough to overcome such impacts whatever they might be. The City of London boasts a unique and integrated system that incorporates banking, legal, legislative and consultative services into financial investment, which makes the market environment immune to external shocks, he explained.