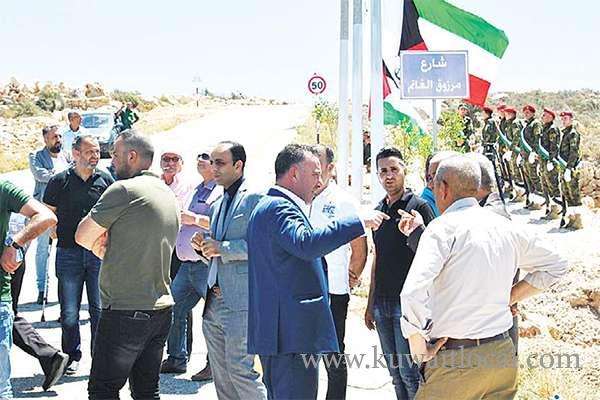 The gesture is an expression of gratitude for Kuwait’s support for the Palestinian just cause. Abdulkarim Al-Zubaidi, head of the municipality, said in a statement to KUNA that the Kuwaiti f ag was raised aloft in appreciation for the Kuwaiti supportive stance, namely the stand by the Kuwaiti parliament expressing opposition to participation in the Manam workshop for the Palestinian question. Al-Ghanim, on Monday, urged the Kuwaiti Government to take “a decisive and an irreversible stand to boycott” the forum in the Bahraini capital.

Affirmed
Meanwhile, Kuwait’s Deputy Foreign Minister Khaled Al-Jarallah has affirmed hat Kuwait’s policy toward the Palestinian cause will remain unchanged. The deputy foreign minister has noted that Kuwait will continue to abstain from normalizing relations with Israel unless demands of the Palestinian people have been met.

In a statement to KUNA on Thursday, he said that the Kuwaiti stance with respect of the Palestinian cause is an unwavering stand; supporting the authority and the Palestinian people in their quest to attain their legitimate rights.

The Palestinian cause is central for the Arab nation, Al-Jarallah stresses. Kuwait’s absence from Al-Manama workshop was in line with its principled stand toward the Palestinian cause and in response to the statement by the National Assembly not to take part in the forum, he explained further. Kuwait aspires to see the concerned super powers take into consideration resolutions of the international legitimacy and the Arab Peace Initiative that focus on the principle of the two states that guarantee interests of the brotherly Palestinian people, he has added.